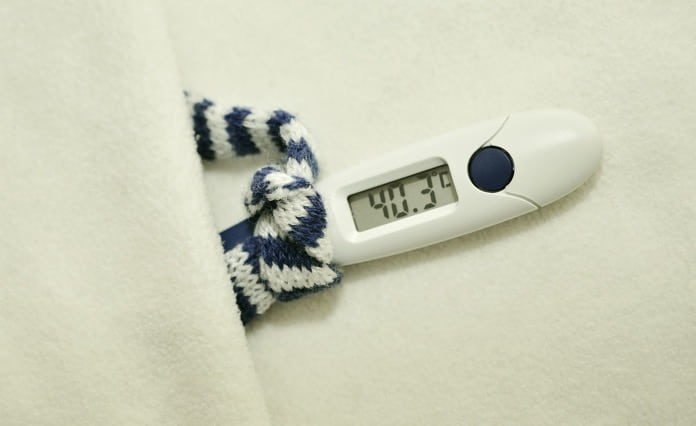 A new paper published in BMC Physiology examines the role of a hormone involved in glucose and fatty acid metabolism, in maintaining normal body temperature.

Adiponectin is a protein hormone released by brown adipose (fat) tissue, which is involved in maintaining normal body temperature by thermogenesis, or the process of heat generation from fat. Studies indicate that exposure to cold temperatures increases adiponectin levels in mice.1,2 It is also known that cold exposure increases thermogenesis in brown adipose tissue3 and the expression of UCP-1, a mitochondrial protein that mediates heat production.4 However, the effects of adiponectin on thermogenesis are not clear. A new study attempted to study these effects by removing the adiponectin gene in mice. The results of the study were published recently in BMC Physiology.5

Measuring the Effects of Adiponectin

The study used adiponectin-deficient mice with wild-type mice serving as controls. The researchers then determined the percentage of fat and lean mass, the resting metabolic rate and locomotor activity and carried out insulin and glucose tolerance tests. To check the effects of cold exposure on core body temperature, the mice were kept at 4°C for six hours with free access to food and water and their rectal temperatures were measured periodically. The researchers also quantified the density of mitochondria occurring in brown adipose tissue, as well as the expression levels of UCP-1 and a number of proteins and enzymes involved in mitochondrial dynamics, and glucose and fat metabolism.

What was the Effect of Adiponectin?

Data analysis did not reveal significant differences in body weight, food consumption, locomotor activity, resting metabolic rate, and glucose and insulin tolerance between the adiponectin deficient and wild-type mice. However, the rectal temperature of the adiponectin-deficient mice was significantly lower than that of the control mice. Additionally, there was a significant decrease in the expression of UCP-1 in the brown adipose tissue of adiponectin-deficient mice, their mitochondrial density was lower, and the expression levels of the mitochondrial fusion genes and some proteins involved in the mitochondrial respiratory complex were lower. Finally, the expression levels of several genes, including the b3-adrenergic receptor, those involved in insulin signalling (insulin receptor, insulin receptor substrate 1, and AKT), phosphorylated AMPK, and SIRT1 was reduced in brown adipose tissue.

To sum up, the data show that the maintenance of body temperature was impaired in adiponectin deficient mice. Therefore, adiponectin is involved in temperature maintenance under cold conditions. The data provide insights into the mechanisms underlying adiponectin action in brown adipose tissue, possibly involving insulin signalling and the AMPK-SIRT1 pathway. Finally, these results indicate that adiponectin may serve as an effective agent for the treatment of hypothermia.