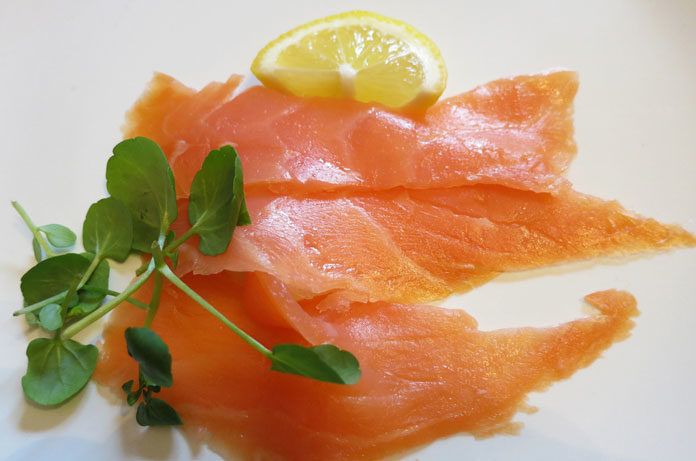 A fascinating new study shows that intake of fatty fish, such as salmon, rather than lean fish (cod) or no fish, can result in a marked improvement in after meal glucose regulation. Increase in after meal blood glucose levels in study participants who ate salmon 5 times/week were markedly lower after 8 weeks compared to baseline or participants who ate cod 5 times/week or ate no fish at all.

Observational, non-interventional studies have reported that fish consumption protects individuals against type 2 diabetes mellitus. However, in studies where participants were followed over the long-term, the effects of fish consumption on the incidence of type 2 diabetes were less clear cut: some studies reported an increase in incidence with regular fish consumption, others reported no effect, and still others reported a decrease in incidence with fish consumption. Notably, most of these studies did not examine the effects of the type of fish consumed. This may be important as it has been suggested that the omega-3 polyunsaturated fatty acids (PUFAs) eicosapentaenoic acid (EPA) and docosahexaenoic acid (DHA) found in fatty fish are converted into anti-inflammatory molecules, and this increased anti-inflammatory action may lower the risk for type 2 diabetes mellitus.9

Now, the results of a new study published in the British Journal of Nutrition in May 2017 indicate that fatty fish consumption modulates after meal increase in glucose levels. The study involved 68 otherwise healthy overweight or obese individuals (basal metabolic index or BMI ≥ 27 kg/m2) of Caucasian descent between 36.2 and 53.2 years of age and was carried out at Haukeland University Hospital, Bergen, Norway. The participants were divided into three groups: one taking weekly doses of 750 g of cod (lean fish) for 8 weeks, the second 750 g of salmon (fatty fish), and the third ate no fish at all. The participants in the cod and salmon groups were asked to eat five dinners per week containing 150 g of fish and not consume other types of fish or seafood for the duration of the study.

Five blood samples from each participant were collected at baseline and after 8 weeks: one in a fasting state and others at 30, 60, 90, and 120 min after a standardized breakfast. The blood samples were analyzed for glucose, C-reactive protein (CRP), insulin, insulin C-peptide, IL-1b, IL-6, IL-8, monocyte chemoattractant protein 1 (MCP-1), and TNFα. Additionally, leucocytes or white blood cells were isolated from the blood samples of a few randomly selected individuals from each of the three groups, and the fatty acid composition of the leucocytes, the ability of these cells to migrate in response to a chemical signal (chemotaxis), and their ability to devour bacterial cells was examined.

There were no differences in the fasting levels of glucose, insulin, and insulin C-peptide between the three groups at baseline, and no differences from the baseline were observed after 8 weeks in any of the groups. However, in the salmon-fed group, the after meal increase in glucose concentration measured at 90 min and 120 min after a standard breakfast were significantly lower compared to the no-fish control group. In the cod-fed group, no such differences were observed relative to the control group. Furthermore, fatty, but not lean fish intake, resulted in a small but statistically significant increase in the concentration of insulin C-peptide at 120 min after breakfast.

Salmon intake also increased omega-3 PUFAs and lowered omega-6 PUFAs in the serum leucocytes of participants compared to the cod-fed and control groups. On the other hand, cod intake increased the docosahexaenoic acid (DHA) content of leucocytes compared to the control group. Leucocytes from the three groups were not markedly different with regard to chemotaxis or their ability to ingest bacteria. The blood levels of the inflammatory markers CRP, IL-1b, IL-6, IL-8, monocyte chemoattractant protein 1 (MCP-1), and TNFα were also not different.

One limitation of the study was that compliance to the dietary requirements was not tested and instead, was participant reported. Another limitation was that the effects of other dietary components and food preparation methods was not accounted for; as the participant reported overall energy and macronutrient intake at baseline and after 8 weeks remained unchanged, it was assumed that any beneficial health effects were a result of fish intake.

Overall, this study shows that incorporating fatty fish, such as salmon, sardines, mackerel, herring, and anchovies, may be beneficial and help prevent or delay type 2 diabetes in overweight or obese individuals. Consumption of fatty fish did not increase insulin or insulin C-peptide levels significantly at the end of 8 weeks, suggesting that the effect on post-meal glucose levels was a result of improved insulin sensitivity and glucose regulation.