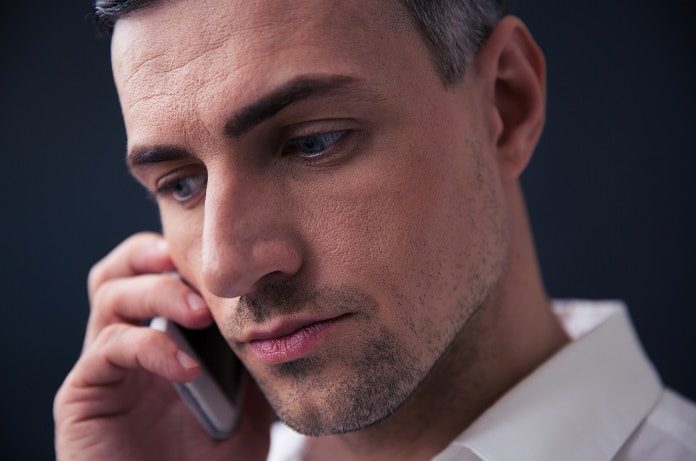 Depression and anxiety are often prevalent in patients with chronic obstructive pulmonary disease (COPD), but these patients do not often seek traditional therapy. A recent study reports that telephone-based cognitive behavioral therapy significantly improved symptoms of depression in COPD patients after an eight-week telephone program.

Chronic obstructive pulmonary disease (COPD) is a well-known disease affecting the lungs, and is characterized by obstruction of the airway and difficulty breathing. On its own, COPD is devastating to quality of life; daily activities progressively become quite difficult. Additionally, those who have COPD have an increased risk of developing anxiety and depression. Without proper treatment, anxiety and depression can increase the mortality rate of COPD. Therefore, effectively diagnosing and treating anxiety and depression in COPD patients is crucial, yet several barriers remain. For example, 75% of patients with COPD report that it would be difficult for them to attend psychotherapy. It has been suggested that therapy administered over the telephone may increase patients’ willingness to participate. Telephone-administered cognitive behavioral therapy (CBT) has been proven effective, but not in a population of patients with COPD. Doyle and colleagues wanted to see if telephone-administered CBT would help patients with COPD suffering from anxiety and depression. They compared this method to that of befriending, a non-formal emotional and social support provided by volunteers instead of psychotherapists. The authors published their results in the British Journal of Health Psychology.

The study included 110 participants (92 made it to completion) recruited from outpatient clinics of the respiratory departments of four hospitals as well as Pulmonary Rehabilitation Programs in Melbourne. Baseline assessments were used to measure COPD and anxiety/depression. Patients were then assigned to receive either CBT or befriending treatment. All patients took part in an initial session with either the therapist (CBT group) or befriender volunteer (befriending group), followed by eight weekly telephone sessions. After the eight sessions, there was a follow-up immediately post-treatment, as well as eight weeks after treatment ended. CBT treatment consisted of teaching behavioral strategies such as the scheduling of activities, relaxation, and social skills training. Befriending, on the other hand, focused on typical every-day topics and events (i.e. small talk) and did not involve any medical discussion of the patients’ symptoms.

The results show that depression symptoms improved significantly in both treatment groups from baseline to immediately post-treatment. However, only those that received CBT continued to have significantly improved symptoms at the eight-week follow-up. Depression was measured using the Patient Health Questionnaire (PHQ-9). Anxiety, surprisingly, improved significantly at all time points, but only in the patients who received befriending treatment. Anxiety was measured using the Beck Anxiety Inventory (BAI). Therefore, both CBT and befriending, by phone, should be considered as potential treatments for depression and anxiety associated with COPD, knowing that each helps a bit differently. Befriending by phone appears to help both anxiety and depression, but possibly not in the long-term, while CBT by phone helps with depression but not anxiety. Interestingly, patient satisfaction was significantly higher in the CBT group, suggesting that telephone-based CBT may be the better option for maintaining patients’ commitment to therapy.