Home Diet Fruit Juice Not a Substitute for Whole Fruit 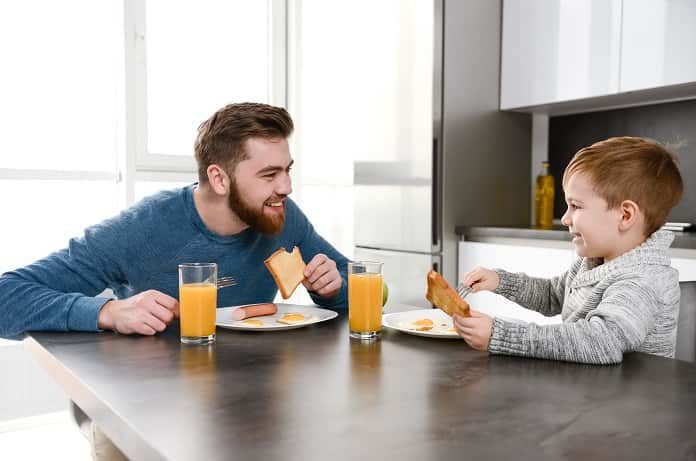 Data indicates that children between 2 and 18 years of age consume nearly half of their fruit intake in the form of juice. The problem with this is that fruit juices have a high sugar content leading to high calorie consumption and increased risk of dental caries. Researchers examined existing data on paediatric fruit juice consumption and compiled conclusions and recommendations on the topic around the generalization that fruit juice is not a substitute for whole fruit.

Fruit juice has historically been recommended by paediatricians as a source of vitamin C and extra hydration and was occasionally prescribed to help children suffering from constipation. It is often marketed as a source of vitamins and minerals, such as calcium.There is data indicating that children between 2 and 18 years consume nearly half of their fruit intake in the form of juice. Unfortunately, these juices often have high sugar content which leads to high calorie consumption and an increased risk of dental caries. Additionally, the lack of protein and fibre content can lead to inappropriate weight gain (either too much or too little). Often, parents will use dilute juices to treat constipation in children, or to provide an additional fluid source.

The U.S Food and Drug Administration (FDA) mandates that a product must be 100% fruit juice in order to be labelled as such. Any beverage containing less than the prescribed amount must list the percent content of fruit juice and must be labelled with the descriptive terms “drink”, “beverage” or “cocktail”. Generally, juice drinks contain 10-99% fruit juice plus added sweeteners, flavours and occasionally, fortifiers (such as calcium or vitamin C). Fruit juice is primarily water; the second most prevalent component is carbohydrate (in the form of sucrose, fructose, glucose and sorbitol), although there are varieties manufactured for infants, with no added sugar (or sulfites). Carbohydrate concentrations can range from 11 g% to >16 g% (in comparison, human milk and standard infant formulas have about 7 g% carbohydrates). Juices also contain small amounts of vitamins and minerals, some naturally occurring(vitamin A and C and potassium). Calcium-fortified juices have about the same calcium content as milk, but are lacking other nutrients, like magnesium, and are often also fortified with vitamin D.

In preparing their recommendations for pediatric consumption of fruit juice, Heyman and colleagues compiled a series of conclusions based on their examination of existing data. They published their findings in the journal Pediatrics. Considering fruit juice in a pharmacologic light: juice components may affect the way the body metabolizes drugs. Flavonoids, typically found in grapefruit, blueberry, pomegranate and apple juices, can decrease the activity of enzymes and transport proteins; for instance, grapefruit juice has been found to reduce intestinal cytochrome P450 3A4 (CYP3A4) activity and produce drug-nutrient interactions that affect a drug’s activity. As such, Heyman and colleagues recommend that grapefruit juice be avoided by any child taking medication metabolized by CYP3A4. A second consideration is carbohydrate absorption from juice. All four sugars undergo some level of absorption in the bowel via various mechanisms. Sorbitol remains mostly unabsorbed, while sucrose is first broken down into its two components, glucose and fructose, before absorption. Absorption of fructose is more efficient in the presence of glucose; clinical studies have shown that malabsorption occurs when fructose concentrations exceed those of glucose (as in apple and pear juice). Unabsorbed carbohydrates undergo fermentation by bacteria in the small bowel, which results in the production of various gases, some of which can be reabsorbed in the colon. Any unabsorbed carbohydrate creates an osmotic imbalance in the gastrointestinal tract, leading to diarrhea, flatulence, bloating and abdominal pain. Toddlers’ diarrhea is a common and benign condition which is often relieved by removal of excess juice from the diets of toddlers (1-4 years old). Despite this, the North American Society of Pediatric Gastroenterology, Hepatology, and Nutrition created a constipation guideline which suggests using juice to treat constipation in infants (by increasing frequency and water content of stools).Another consideration is the microbial safety of juice, particularly with respect to unpasteurized juices. These products may contain harmful pathogens, such as, E. Coli, Salmonella or Cryptosporidium species.

The authors also examined the American Dietary Guidelines regarding juice consumption. The aim of the guidelines is to promote the consumption of nutrient-dense foods, with fruit being one of the key food groups. Fruits and vegetables are recommended to ensure appropriate intake of vitamins and minerals, reduce the risk of cardiovascular disease and cancer, and avoid excess calorie intake. The guide permits that up to half of the recommended servings (1 cup of fruit for 1-4 years old and 2 cups of fruit for 10-18 years old) be consumed in the form of 100% fruit juice. One 6-oz glass is the equivalent of one fruit serving; however, there are no nutritional advantages to consuming juice as it does not have the fibre content of whole fruit and can be consumed more quickly, kilocalorie for kilocalorie. Despite this, Heyman and colleagues suggest 100% fresh or reconstituted fruit juice can be a healthy part children’s diets (over the age of 1) if consumed as part of a balanced diet. This involves encouraging children to eat whole fruit and educating them on the benefits of fiber intake.

In considering consumption across three age groups (infants, 1-6 years and 7-18 years), Heyman and colleagues found that the American Academy of Pediatrics recommends that only human milk be fed to infants until around six months of age, as introduction of juice may lead to it replacing human milk or infant formula in the diet and there is the risk of malnutrition and short stature in children with excessive juice consumption. As such, they recommend that families should be educated that human milk and infant formula is sufficient for meeting infant fluid requirements. Similarly, low-fat or nonfat milk and water are sufficient for older children.The authors suggest that it is best to avoid giving juice to infants before the age of 1 (unless clinically indicated), and thereafter, allow for consumption of up to 4 oz/day for 1-3 year olds and 4-6 oz/day for 4-6 year olds. In addition, they suggest providing juice to toddlers in a cup, to reduce the risk of dental caries due to the high sugar content of juice, as well as reduce the likelihood that toddlers will be consuming juice throughout the day. Juice should not be given to toddlers at bedtime.

Additionally, they suggest that fruit juices should not take the place of oral electrolyte solutions in the management of diarrhea in children; as previously mentioned, the high carbohydrate content of juice can lead to malabsorption and create an osmotic imbalance that may exacerbate the condition. Similar considerations regarding juice consumption are relevant to children between 1 and 6 years of age and the same recommendations apply. Fewer nutritional issues are present with juice consumption in 7-18 year olds, primarily because they generally consume less of these beverages. Regardless, intake should still be limited to 8 oz/day (or half the recommended daily serving of fruit), as excess juice consumption may lead to the development of obesity (due to increased energy intake). One study found an association between juice intake of 12 oz/day and obesity. As such, the authors recommend that paediatricians evaluating children for malnutrition determine the amount of juice the child is consuming.