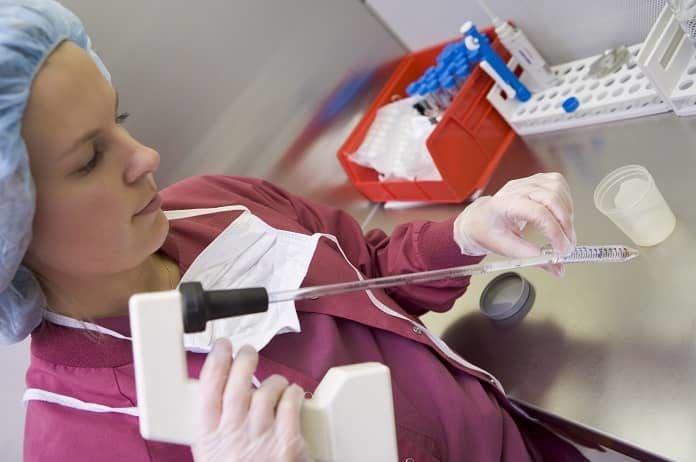 In vitro fertilization with frozen embryos in women with polycystic ovary syndrome has been shown to result in higher live birth rates when compared to using fresh embryos. Researchers in China investigate whether the implantation of fresh or frozen embryos are equally beneficial in women with regular ovulatory cycles.

In vitro fertilization (IVF), the process of combining a sperm and egg outside of the body for later implantation into a woman’s uterus, has advanced over the past 40 years. Some of the advancements include the ability to multiply the number of eggs retrieved by using controlled hormonal stimulation, and the ability to preserve and conserve additional embryos for further use. It has been hypothesized that inserting frozen embryos may provide a favourable environment inside the uterus for implantation, however, it is unclear whether ovulating women with infertility experience increased birth rates when frozen embryos are used during IVF.

The New England Journal of Medicine recently published a study completed by researchers in China to investigate how frozen embryos affect birth rates in infertile women who have ovulatory cycles. The researchers compared the transfer of frozen embryos with fresh embryos and assessed the maternal and neonatal complications, using live birth after the first embryo transfer as the primary outcome. Using a randomized controlled trial, couples (i.e., both the female and male partners) were assigned in a 1:1 ratio to the group who would use frozen embryos or the fresh embryo group.

The 2,157 participants in the study included women between 20-35 years of age who had regular menstrual cycles but were undergoing their first cycle of IVF or intracytoplasmic sperm injection because of factors related to their fallopian tubes including unilateral or bilateral blockage of the tubes and surgical tying of the tubes.

Participants were also enrolled if they were undergoing IVF for infertility factors related to the male partner including low sperm count or motility. The women had infertility complications for more than one year, and had a menstrual cycle length of greater than 21 days and less than 35 days.

Women were excluded if they had preexisting medical conditions that were associated with adverse pregnancy outcomes such as high blood pressure, diabetes mellitus, or liver dysfunction. Women with existing pathologies of the uterus such as submucosal fibroids and adenomyosis, and polycystic ovary syndrome were also excluded.

Each woman was given a regimen of gonadotropin-releasing hormone (GnRH) to stimulate the ovaries on day three of the menstrual cycle and treatment was continued until the day of human chorionic gonadotropin administration (hCG). The women assigned to the fresh embryo group were given additional support with a daily vaginal progesterone gel and oral dydrogesterone twice daily, which started immediately after the eggs were retrieved for culturing. On day two or three of the embryo culture, up to two embryos were selected for IVF. In women who received IVF with frozen embryos, up to two frozen embryos were thawed and transferred after ovulation. A transvaginal ultrasound was used to confirm clinical pregnancy if conception occurred at three weeks.

The researchers were interested in all pregnancies that resulted in a delivery of a neonate who was 28 weeks of gestation or older.There were no significant differences in birth rates reported in the fresh embryo group (50.2%) when compared to those implanted with frozen embryos (48.7%), however an analysis completed afterwards showed the rate of second trimester pregnancy loss was lower in those who used frozen embryos (1.5%) than fresh embryos (4.7%). Moderate and severe ovarian hyperstimulation syndrome were experienced less often by women given frozen embryos. Ovarian hyperstimultion syndrome is a potential dangerous medical condition that may affect some women who take fertility medication. There was no significant difference in the birth rate when comparing the use of frozen embryos to fresh embryos during IVF in ovulating women.

The study included limitations. Participants withdrew from the trial and deviated from the study protocol at a rate higher than 15%. The study was also not blinded and therefore bias cannot be entirely ruled out.

The study concludes that the overall birth rate did not differ between the groups receiving fresh or frozen embryos. They women who received frozen embryos, however, had a lower risk of ovarian hyperstimulation syndrome.