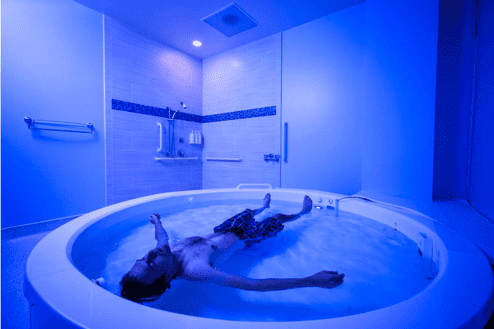 Researchers in the United States investigate whether floatation therapy can reduce symptoms of anxiety, stress, and depression in a clinical sample.

individuals lay on their backs in a shallow pool of water saturated with Epsom salts that allow them to float effortlessly with their eyes, nose, and mouth comfortably above the water. As well, special care is taken to make sure that any input from our senses is minimized. For example, the area is completely dark and located in a temperature-controlled, soundproofed room.

What are the Effects of Floatation Therapy?

Given this gap in the literature, researchers in the United States investigated the effect of floatation therapy on symptoms of anxiety, stress, and depression in a clinical sample. The results were recently discussed in PLoS ONE.

The researchers recruited 50 participants who exhibited a range of different anxiety and stress-related disorders: posttraumatic stress, generalized anxiety, panic, agoraphobia, and social anxiety. Many of the participants (46 out of 50) reported experiencing depression in addition to their anxiety or stress-disorder. As a point of reference, the researchers also recruited 30 healthy participants to provide context for the findings seen in the clinical participants.

The participants were required to fill out three different types of questionnaires, which included baseline measures, pre or post-float measures, and follow-up questions. The baseline measures were used to assess the participants’ current symptoms and overall mood and functioning during the time period of the study. The pre or post-float measures were collected 30 minutes before and after each float, in order to assess variations in symptoms and mood. Lastly, the follow-up questions collected information about the participants’ actual float experience.

How Did Anxious Participants Respond to Floatation Therapy?

The floatation device used in this study was intended to reduce the barriers to entry for anxious populations. Instead of the traditional float tank with an enclosure, there was an open float pool in a room to lower feelings of claustrophobia. As well, the participants were given complete control over the experience, with the opportunity to enter and exit the pool at their will and the choice of having the lights on or off.

The floatation therapy session resulted in no serious adverse events or major safety concerns in the clinical sample. An analysis of the impact of floatation therapy on symptoms revealed significant reductions in anxiety, stress, muscle tension, pain, depression, and negative feelings in the clinical sample. Additionally, there was a significant improvement in mood demonstrated by increases in reports of serenity, relaxation, happiness, positive feelings, overall well-being, energy levels, and peacefulness.

In reference to the healthy sample, the clinical sample experienced changes that were considerably larger in magnitude. As well, post-float anxiety levels in the clinical sample population approached reported levels of that seen in the healthy population. Further analysis discovered that the largest changes in symptoms and mood were seen in the participants with the highest baseline levels of anxiety.

Floatation Therapy was Safe and Effective

Although this study indicates that floatation therapy is a promising intervention for reducing anxiety in clinical populations, the findings will need to be replicated in a larger, more controlled study before any concrete conclusions are drawn. Future studies should also investigate whether such positive effects can be sustained, or even improved, with repeated floatation therapy.