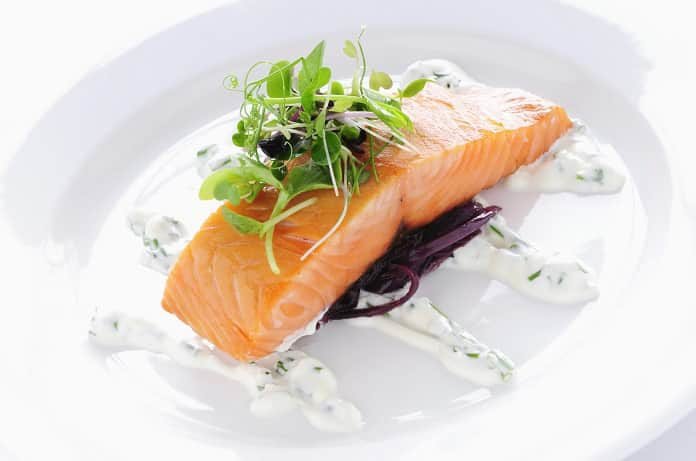 Study finds that consuming fish ≥2 times per week was associated with lower disease activity scores and demonstrated other traits that could contribute to improving disease activity, such as lower body mass index. However, more randomized control studies are necessary to prove a causal relationship.

Rheumatoid arthritis is described as a chronic autoimmune disease in which the body’s immune defenses erroneously attack the joints, causing inflammation that thickens the synovium (the tissue that lines the inside of joints). Since the synovium is responsible for joint lubrication and the facilitation of smooth movements, this process results in swelling and pain, and can ultimately manifest as irreversible cartilage damage, loose and unstable joints, joint deformity, and loss of mobility in the hands, feet, wrists, elbows, knees, and ankles, as well as the cardiovascular or respiratory systems.

To reduce inflammation, improve symptoms, and prevent long-term joint damage, sufferers of rheumatoid arthritis are often treated with disease modifying anti-rheumatic drugs (DMARDs), among other anti-inflammatory therapies like nonsteroidal anti-inflammatory drugs and corticosteroid medications. Omega-3 fatty acids have been studied for decades as an anti-inflammatory alternative, as these polyunsaturated fatty acids decrease the quantity of proteins that promote inflammation in the body. Eicosapentaenoic acid (EPA) and docosahexaenoic acid (DHA) are two types of omega-3 fatty acids that have been researched for their effects on the disease activity of rheumatoid arthritis. Double-blind, placebo-controlled trials demonstrated that fish oil (consisting of both EPA and DHA) improved tender joint counts and resulted in higher rates of remission. This finding instigated the proposal that omega-3 fatty acid consumption as food through fish rather than through fish oil supplements may be associated with even lower rheumatoid arthritis activity.

A study published in Arthritis Care & Research in June conducted a cross-sectional analysis over a 2-year period in American adults between the ages of 45-84 who had been diagnosed with rheumatoid arthritis. At the beginning of the study, participants completed a 120-item food frequency questionnaire to record how often they consume each item using a nine-point scale ranging from “never to <1/month” to “≥2/day”. The consumption of fish was calculated by adding the frequencies of tuna fish, salmon, sardines (cooked or raw including sashimi or sushi) and other broiled, steamed, baked or raw fish (trout, sole, halibut, poke, grouper, etc.). Compared to other seafood items, these items were selected to represent non-fried fish consumption due to their higher omega-3 fatty acid content. Fried fish, non-fried shellfish, or fish in mixed dishes were not included in the study’s assessment of fish intake, as previous studies did not correlate these items with relatively higher levels of EPA and DHA.This can be attributed to the deterioration of long-chain fatty acids during cooking and frying processes.

After adjusting for confounding variables, the recorded disease activity scores were significantly lower among participants who consumed fish ≥2 times/week compared to those eating fish never to <1 time/month. This result was further accentuated by another finding: for each additional serving of fish per week, disease activity scores once again fell significantly. According to the study’s analysis, the group of participants who consumed the most fish (≥2 times per week) had an intake of no more than approximately 5.5 grams of omega-3 fatty acids each day.The observed difference between the highest and lowest categories of fish consumption was roughly one-third the magnitude of previously reported pre- and post-treatment differences in disease activity among methotrexate (an immune system suppressant) users.

The study also revealed that baseline consumption of fish ≥2 times per week was associated with lower disease activity scores, potentially due to healthier lifestyles among participants who most often consume fish or the various macro nutrients and micronutrients found in fish as a whole food.This group also demonstrated other baseline traits that could contribute to improved disease activity, such as lower body mass index and higher socioeconomic status. However, cigarette smoking and longer disease duration were highly prevalent in this group, creating challenges in establishing conclusive associations between potential confounding variables, fish consumption, and disease activity. Randomized controlled trials are necessary to firmly prove a causal relationship between greater fish consumption and lowered rheumatoid arthritis disease activity.