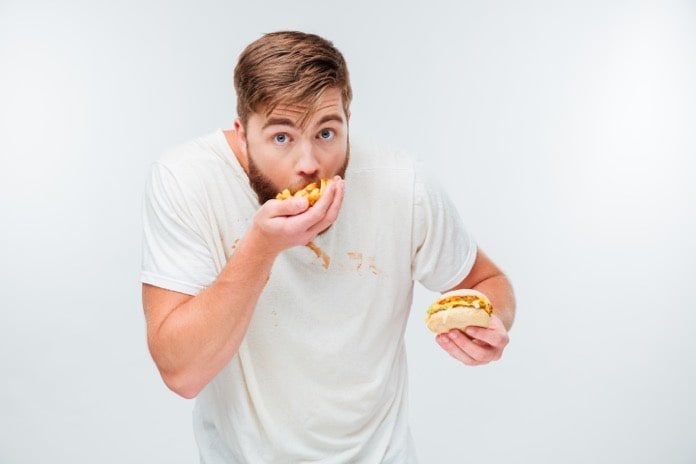 In a new study, researchers investigated whether a father’s bad eating habits could have a direct impact on the health of their children.

There is evidence showing that healthy, fertile men have high-quality sperm compared to men with bad eating habits and who are overweight, smoke, drink excessively, and who have type 2 diabetes. However, when looking for information about the importance of a healthy diet when trying to conceive and its impacts on a child, there is a lot of information available for mothers and not enough for fathers.

Male reproductive health is an important aspect of a healthy pregnancy

During conception, men do not just contribute half of the genes to make a child, their sperm also contributes to ensuring a healthy pregnancy. Seminal plasma, which is part of the seminal fluid in an ejaculation, provides a protective medium for sperm during their journey along the female reproductive tract. It also plays a role in influencing pregnancy outcomes. Therefore, male reproductive health is also an important consideration.

It is well understood that a mother’s eating habits and diet while they are pregnant can have an impact on the child’s development and health. But does a father’s health at the time of conception determine the development and life-long risk of disease of their children?

A new study in the United Kingdom aimed to bridge this gap and gain a better understanding of the impact a father’s eating habits could have long-term on his offspring and the underlying mechanisms. They developed a mouse model to determine whether a poor-quality diet has an impact on sperm quality, fetal development, long-term growth and the health of the adult offspring.  The study was carried out on mice at the University of Nottingham in England. Male mice were fed either a normal diet or a low-protein diet. Their findings were recently published in PNAS.

The findings showed that mice fed a poor diet (low-protein diet) produced sperm with fewer chemical changes in their DNA which regulate gene expression compared to the mice fed a normal diet. The results also showed that seminal fluid suppressed inflammatory and immunological responses in the mother’s womb, which is essential for a healthy pregnancy. The researchers observed the changes in sperm and seminal plasma due to a poor diet (low-protein diet) resulted in offspring more likely to be obese or overweight, reduced expression of genes involved in metabolizing fat, and displaying symptoms of type 2 diabetes.

While this study used an animal model, the researchers believe their findings are also relevant for humans as well. These findings provide evidence that when a child is conceived, the environment the embryo is developing in and the quality of genetic material passed on by the father are both important. The study shows that a father’s diet can not only alter the composition of seminal plasma but can also have an impact on the health of their offspring.

In conclusion, this study not only provided evidence that a father’s diet affects the development and long-term health of their children but also insights into how these effects occur. Based on the observations in this study, there needs to be improvements in the available information about diet, bad eating habits, and lifestyle choices of prospective fathers.