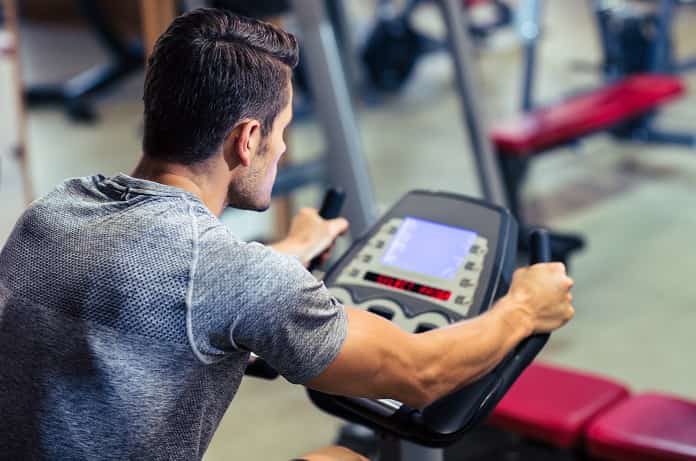 In a recent study, scientists determine whether people can maintain their health with high-intensity interval training while on a fast food diet.

The fast food diet currently prevalent in North America is both popular and unhealthy.  For example, a study has shown that during the 2007-2010 period, adults in the United States received 11% of their daily energy intake from fast food.  As well, numerous studies have testified to the negative effect of consuming fast food, including weight gain and cardio-metabolic issues.

Another popular trend in North America is the style of exercise known as high-intensity interval training (HIIT).  This regimen involves performing exercises at an extremely high rate for short durations. An example of a HIIT exercise would be the repetition of cycling on a stationary bike as hard as an individual can go for 30 seconds interspersed with periods of rest. But can individuals eat a fast food diet all day long, and still have decent health if they engage in high-intensity interval training?

Given the very topical nature of these two areas, researchers in Montreal ran a study to see if the negative effects of a fast food diet could be reduced by a high-intensity interval training regimen.  The study was recently reported in the journal Nutrients.

The Study: Only Fast Food. Only HIIT.

Fifteen subjects participated in the study. Researchers required the subjects to be male, between 18-30 years old, have a Body Mass Index (BMI) between 18.5-29.9 kg/ m2, be physically active (more than 150 minutes of physical activity per week), have no orthopaedic limitations, be non-smokers, and consume low amounts of alcohol (less than one drink per day).

The subjects ate exclusively fast food from a popular fast food restaurant chain in the Montreal area, for 14 consecutive days.  Specifically, the subjects ate an extra value meal (i.e., sandwich, fries or hash browns, and a drink) of their choice for breakfast, lunch, and dinner.  They were also allowed to eat a muffin of their choice as a snack during the day if they were hungry between meals

The subjects performed high-intensity interval training exercises daily for the same 14 consecutive days on a treadmill.  The regimen consisted of a five-minute warm-up followed by fifteen 60-second sprints, interchanged with 60-second recovery walking periods, and ending with a five-minute cool-down.

The authors of the study acknowledged limitations of their study, including the small sample size, lack of a control group, and the short time period involved.  As well, they understood that the eventual results of the study, given that the subjects were all healthy young men, may not be applicable to the general population.

Overall, the results attested to the beneficial role of exercise in negating or reducing the effects of an unhealthy diet.  The test subjects did not show deterioration in their cardio-metabolic profile during the duration of the study.  In fact, they actually showed an improvement in some key health measures, such as rate of oxygen consumption and sugar (glucose) levels.  However, the subjects’ HDL-cholesterol (“good cholesterol”) levels decreased during the study. The reasons for this decrease were not clear.

The application, at least for young men, is that high interval training exercise can have beneficial impacts on health, even by improving their health independent of what they are eating.  Thus, healthcare professionals and researchers need to further communicate and investigate the potential benefits of high-intensity exercise.