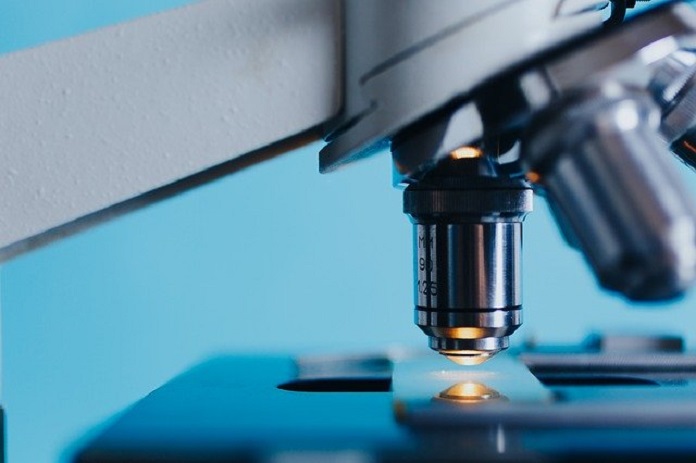 Scientists investigate how cells regulate the proteins that are on the outside of their membranes. This research could provide important clues to help develop treatments for Alzheimer’s disease.

Proteins are the complex molecules that play a critical role in cell biology. They are made up of a chain of amino acids that fold up to form a 3D structure and shape. Each protein has a unique structure that determines its function. Think of proteins like tools, hammers and screwdrivers have different shapes but they are each designed to perform a very specific task. Proteins are made in the cell and sometimes they don’t fold correctly or their structural integrity is damaged due to stresses like high temperatures and oxidative stress. This can be dangerous as the abnormal proteins can aggregate and cause damage in the cell. This can lead to a range of illnesses called protein deposition diseases such as Alzheimer’s disease, Huntington’s disease, and Parkinson’s disease. In the case of Alzheimer’s disease, beta-amyloid peptides are toxic because they stick together and form aggregates. These are often secreted outside the cell and the aggregates then stick to extracellular molecules and form plaques.

In healthy cells, there are protein quality control systems in place to make sure proteins fold correctly. One of these systems uses chaperones, these are proteins whose sole job is to ensure that other proteins are the correct shape. If the target proteins are incorrectly folded one of two things happens, either the chaperone uses energy (in the form of ATP) to refold the protein or the entire protein is degraded.

What happens to the proteins that are secreted and function outside of the cell?

Not all proteins are designed to work within the cell. These proteins can be susceptible to damage from stressors such as pathological conditions, shear stress, and acidosis and alkalosis (incorrect pH). So what happens when these proteins undergo structural changes? Some chaperone proteins are also secreted, such as clusterin. The problem is that there is a thousand times less ATP (energy) outside the cell, meaning that these chaperones can’t refold misfolded proteins. The exact mechanism of how the chaperons work outside the cell is not well understood.

How does clusterin work?

The first question the researchers asked was if clusterin that is bound to a misfolded protein would be able to get inside the cell. They wanted to know if these proteins would be broken down inside a cell structure called the lysosome. Lysosomes are another protein quality control system and they are responsible for degrading proteins with an acidic environment and digestive enzymes.

The scientists designed a new internalisation test to help them answer these questions. They used genetic engineering to attach two fluorescent proteins to clusterin (one green and the other red). The red fluorescent protein is resistant to acidic conditions and digestive enzymes. So if the scientists saw red under the microscope they could conclude clusterin was indeed internalised and degraded but if they saw only green they could conclude that the clusterin was internalised but not degraded. The scientists combine their internalisation assay with flow cytometry and fluorescent microscopy to show that the Clusterin-misfolded protein complex was preferentially internalised and degraded with a lysosome. The team used various cell types (kidney, ovary, lung, bone, liver, and colon) to test their assay and showed this internalisation occurred generally. They then went to show that the beta-amyloid peptide was able to bind to clusterin and was subsequently degraded in human embryonic kidney cells.

What is the clusterin receptor?

The scientists wanted to know if there was a receptor on the cell surface that bound to clusterin and triggered the internalisation of this complex. The team used a genome-wide CRISPR screen to find out which genes were important for clusterin uptake. They identified 20 different genes important for uptake of clusterin and many of them were implicated in heparan sulphate (HS) synthesis. To test if HS was the receptor for clusterin the scientists used genetic engineering to prevent the expression of various genes involved in the HS pathway. They found that when these genes were knocked out there was reduced uptake of the clusterin-misfolded protein complex. When they restored the gene expression they found this restored complex uptake. This data showed that HS pathway disruption prevented internalisation of only the clusterin complex and not of endocytosis in general. The scientists then used a pull-down assay to confirm that clusterin directly binds to HS. These data strongly suggested that HS is the receptor for the uptake of clusterin-misfolded protein complexes.  The group went on to show that HS was the clusterin receptor independent of the misfolded proteins bound. They tested beta-amyloid peptide and a variety of misfolded red blood cell proteins.

The researchers were able to show an entirely novel mechanism for regulating extracellular proteins called the chaperone- and receptor-mediated extracellular protein degradation (CRED) pathway. Although this is an exciting discovery the involvement of the pathway in Alzheimer’s disease requires further investigation. The tests on beta-amyloid peptides were conducted in kidney cells and not neuronal cell lines. There was also no investigation into whether or not this mechanism works in animals. It seems unlikely that increasing clusterin expression will result in a treatment for Alzheimer’s disease as overexpression of this protein has been linked to cancer pathogenesis. The work present is an exciting contribution to our basic understanding of protein regulation outside the cell and is promising progress toward understanding many of the protein deposition diseases.

Image by Konstantin Kolosov from Pixabay