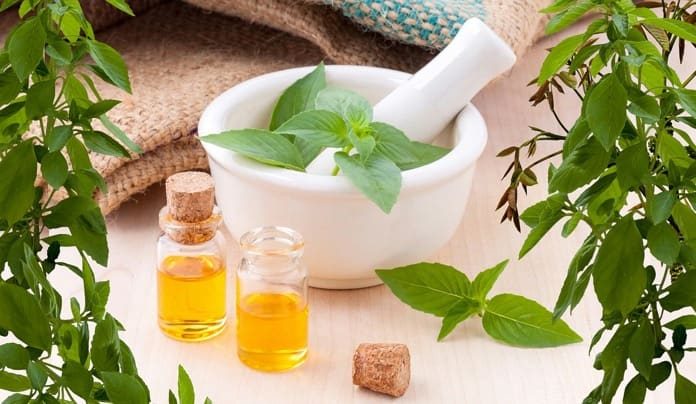 Researchers from the Johns Hopkins Institute in Maryland, USA studied the effectiveness of essential oils in eradicating the Lyme disease bacteria.

Lyme disease is a bacterial infection that is spread to humans through the bite of infected deer ticks. The early manifestation of Lyme disease is a localized skin rash. It is named after the town of Old Lyme in Connecticut, USA where it was first reported and is the most common tick-borne infections in the US.

Borrelia burgdorferi is the bacterium that causes Lyme infection. The bacterium is transmitted to humans via tick bites. When an infected tick bites a human, it transmits the infective bacteria to humans. The typical symptoms of Lyme disease include a “bull’s eye” skin rash, fever, headache, and fatigue. As the infection spreads through the body, it affects the joints and the nervous system.

Untreated Lyme disease could result in the infection spreading to various parts of the body. It can cause changes in heart rhythm, arthritis of the joints, and similar severe symptoms. Currently, Lyme infection is treated with antibiotic drugs such as doxycycline, amoxicillin or cefuroxime. Most patients suffering from Lyme disease find relief from their symptoms within two to four weeks of antibiotic therapy. Some patients continue to suffer from symptoms after receiving treatment.

However, a smaller group of patients (approximately 36%) continues to suffer from symptoms, for six months to at times a year, despite receiving antibiotic treatment. These patients suffer from a condition known as post-treatment Lyme disease (PTLDS) syndrome.

The reasons for PTLDS are unclear and likely to be due to a number of factors such as autoimmunity or tissue damage. Another key factor in PTLDS development is the persistence of the infective bacteria despite the initial antibiotic treatment.

Researchers believe that the infective bacteria, B. burgdorferi, can go into a dormant, non-growing phase that is immune to the current antibiotic treatments. These bacterial cells known as persister cells were the focus of the study carried out by senior researcher Dr. Ying Zhang and his colleagues.

In their study published in the journal Antibiotics, the researchers screened a panel of 35 essential oils for their ability to kill the bacterial cells that did not respond to common antibacterial treatment. The study was a continuation of their earlier work that showed that certain essential oils were effective in killing the Lyme disease bacteria.

In an earlier study, Dr. Zhang and his group used the bacteria that are in a non-growing or ‘stationary’ phase as the target of a number of essential oils. Their results identified three essential oils that were highly effective against the persister cells: oregano oil, cinnamon bark, and clove bud.

Based on their promising results, they expanded the panel of essential oils that they tested against the persister cell cultures. This expanded study with 35 essential oils identified 10 additional oils as well cinnamaldehye, the active component of cinnamon bark as being as effective as or more effective than currently used antibiotics in killing the persister bacterial cells.

The 10 essential oils (garlic, all spice, cumin, palmarosa, myrrh, hydacheim, amyris, thyme white, Litsea cubeba, lemon eucalyptus), at a concentration of 0.1% were more effective than the drug doxycycline currently used to kill the Lyme disease bacteria. The researchers essentially compared the ratio of live to dead bacterial cells in lab-dishes after treatment with the panel of essential oils. They used doxycycline, cefuroxime, and daptomycin treatment as comparators with known positive effects in killing the B. burgdorferi cells.

In a press release published by the Johns Hopkins School of Public Health, Dr. Ying Zhang stated, “We found that these essential oils were even better at killing the ‘persister’ forms of Lyme bacteria than standard Lyme antibiotics.”

Building on their earlier research, the group also identified cinnamaldehyde as the active component of cinnamon bark that exhibits exceptional activity against the persister or non-growing cells as well as the replicating, growing bacterial cells. The common use of Cinnamaldehyde in food processing and preservation suggests that it is safe for human consumption. These results make cinnamaldehyde an important molecule for further animal studies and potential clinical trials.

The researchers note that the experiments reported in this study were carried out in lab-dishes. Scientists do not know if these essential oils will be effective and non-toxic in animal models and clinical trials. Additionally, the focus of this study was the eradication of the persister, non-growing B. burgdorferi cells.

Additional studies could help to determine if these oils are also effective as the actively growing, replicating B. burgdorferi cells. In today’s time of the public health crisis resulting from growing antibiotic resistance and the call for reducing antibiotic usage, these essential oils are turning into attractive alternatives to antibiotic therapy.