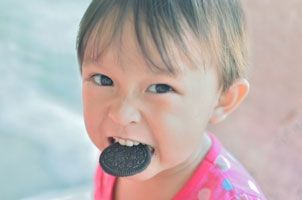 A recent study suggests that emotional eating in children is observable between the ages of 5 and 7 years old, and that these tendencies can be influenced by parents’ feeding practices.

The current study aimed to determine whether children between the ages of 5 and 7 years are more likely to eat under conditions of stress, even when they are not hungry. Additionally the researchers set out to determine whether feeding practices of parents have any influence on the tendencies of children to emotionally over eat.

The researchers studied a sample of 35 children (aged between 2.8 and 5 years) and their parents. At the beginning of the study the parents completed a number of questionnaires, including questions regarding uses of food, for example, use of food as a reward. At a following session, children were provided a room with toys to play with. The children ate a provided lunch with their mothers, and were instructed to eat until they were full. Following the meal, the children were asked to rate their mood by looking at a 5-point smiley-face scale. The investigator then showed the children some toys and instructed the children that if they completed a coloring task they would be able to choose one of the toys. The coloring task was designed such that a required color would be missing, ensuring that the child would not be able to finish the required task, and would therefore not receive the toy. The child was again asked to rate their mood on the smiley face scale. At this point, the researcher placed 6 bowls of snacks in front of the child, and explained that the child could either eat the snacks or play with some toys while she would search for the crayon. When the researcher returned the missing crayon, the child finished the coloring, and received their toy. The child then again rated their mood on the smiley face scale. A control group of children also completed the coloring task, however no crayon was missing for this group of children.

The results of the study revealed that children who were involved in the ‘missing crayon’ group ate a significantly greater amount of calories when compared with children in the control group. From the surveys the mothers filled out, the researchers found that the more the mothers used food as a reward, or restricted food for health reasons, the more the children tended to eat even when they weren’t hungry, under conditions of negative emotion.

The researchers suggest that parents can influence children’s eating habits, in particular emotional eating in children, by restricting or rewarding with food. This in turn may teach children to rely on food to cope with their negative emotions. They suggest that due to the fact that emotional over eating increases with age, there is more research necessary to further evaluate the lasting implications in terms of food intake and weight gain.

Image courtesy of arztsamui at FreeDigitalPhotos.net