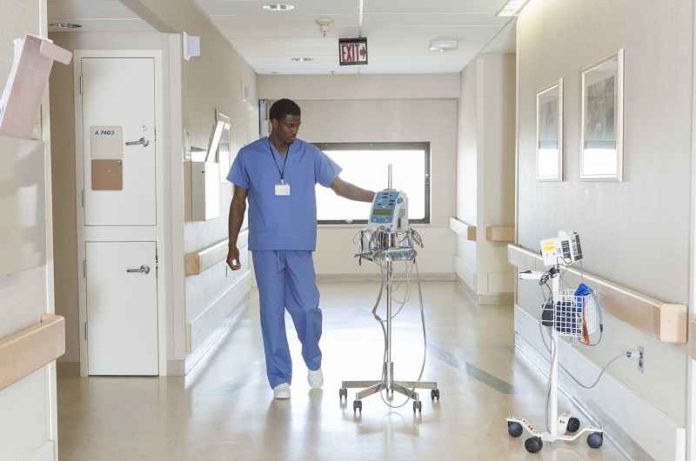 Improper and ineffective disinfectant strategies in hospitals can expose patients to the risk of acquiring multidrug-resistant organisms and Clostridium difficile. The Benefits of Enhanced Terminal Room Disinfection study, aimed to identify the most effective terminal room disinfection strategy that will help hospitals reduce the incidence of hospital-acquired infections.

Hospital acquired infections remain a major concern for health care professionals and patients. The most concerning are multidrug-resistant organisms including Methicillin-resistant Staphylococcus aureus (MRSA), vacomycin-resistant enterococci (VRE), and Acinetobacter, all of which are associated with adverse clinical outcomes. In addition, the Clostridium difficile bacterium is one of the most common hospital acquired infections and is known to cause severe diarrhea. Due to these concerns, effective terminal room disinfection, defined as the disinfection of rooms between occupying patients, is an important hospital procedure that must be optimized. The key question, however, remains regarding which disinfectant strategy is the most effective at reducing risk of acquisition and infections.

The Benefits of Enhanced Terminal Room Disinfection study, published in The Lancet, is aimed at assessing the effectiveness of different disinfectant strategies in reducing the risk of infections. The study, conducted between April, 2012, and July, 2014, recruited a total of nine hospitals across the United States. Four different disinfectant strategies were tested, including the reference group, which used a quaternary ammonium-containing disinfectant, except for rooms previously occupied by patients with C. difficile, in which case bleach was used. The second strategy, the UV group, used a quaternary ammonium-containing disinfectant and an ultraviolet C (UV-C) device, or bleach and the ultraviolet C device for rooms previously occupied by C. difficile patients. The remaining disinfectant strategies included the use of bleach alone (bleach only group), or the use of bleach in combination with the UV-C device (bleach and UV group). The four different strategies were employed in all nine hospitals over four consecutive 7-month periods.

A total of 21,395 patients met the inclusion criteria and were included in the study. Of these patients, 4,916 were part of the reference group, 5,178 in the UV group, 5,438 in the bleach only group, and 5,863 in the bleach and UV group. The analysis revealed that patients admitted to rooms previously occupied by patients with a multidrug-resistant organism or C. difficile were 10-30% less likely to acquire the same pathogen if the room was terminally disinfected using enhanced strategies, like UV, bleach, or bleach and UV. In comparison to the reference group, the largest reduction in incidence was observed in the UV group, where the UV-C device was added to the standard disinfectant strategy. However, the incidence of infection, relative to the reference, was similar in the bleach only and the bleach and UV groups, indicating that the addition of bleach, or bleach and UV, did not significantly reduce risks.

The researchers also analyzed the incidence of infection of each pathogen of interest. They found that the use of UV-C devices and bleach together, did not significantly reduce C. difficile infections, in comparison to using bleach alone. The incidence of MRSA infections was also not significantly different between the groups, although it is noteworthy that the lowest incidence of MRSA infection was in the UV group. It was also observed that VRE incidence was significantly lower with the use of bleach disinfectants. Finally, there was only one patient that acquired Acinetobacter, making it difficult to assess which disinfectant is most effective against this bacterium.

The Benefits of Enhanced Terminal Room Disinfection study was a large, prospective, multicenter, cluster-randomized trial aimed at assessing the efficacy of various disinfectant strategies against commonly acquired infections. First and foremost, the study re-established the notion that enhanced disinfectant strategies reduce the likelihood of multidrug-resistant organism or C. difficile infections. Moreover, they demonstrated that UV-C devices effectively reduced the risk of infections, whereas bleach and bleach in adjunct with UV-C did not. When assessing the incidence of each pathogen alone, the UV-C device was unable to further reduce the risk for C. difficile infections. Overall, the study demonstrated the importance of utilizing the most effective strategies for terminal room disinfection. Although identifying the most effective disinfectant strategy is important, emphasis should also be placed on the appropriate and effective use of these techniques.