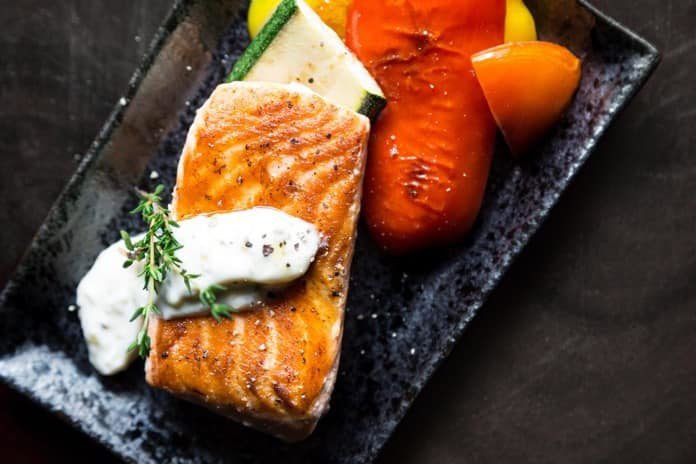 Researchers in the United Kingdom examined the relationship between fish consumption and smoking behaviour patterns in pregnant women.

Smoking is a large risk factor for babies during fetal development. It has been shown to be the cause of many adverse developmental and health outcomes. Maternal smoking can decrease the blood flow and oxygen delivery to the placenta, and alter gene expression in the fetus. Nicotine can cross the placenta and cause further alterations in neurological development.

Tobacco smoke also contains many neurotoxins. Exposure to tobacco smoke as a fetus has been associated with increased likelihoods of premature or stillbirths, low birth weight, malformation, and attention deficit hyperactive disorders in children. It has also been shown to cause structural changes in the brain such as reductions in the cortical grey matter, the area where most of the active brain functions take place.

Studies indicate that women who smoke in the first trimester of pregnancy may be less likely to breastfeed and be employed and are more likely to have postpartum depression. They also show less attachment to their children. Smoking behavioural patterns are associated with other co-founding factors such as socioeconomic status and education.

Seafood, especially fish, is a great source of n-3 highly unsaturated fatty acids (HUFA). These types of fats are known to protect the functions of the cardiovascular system as well as the nervous system. HUFAs are essential for neuronal membranes, and for carrying out complex cellular functions such as gene expression. As a result, they may affect our behaviour. HUFAs are also crucial for healthy brain development and function. They play a role in the dopaminergic function of the brain, which allows the brain to release the “feel-good” neurotransmitter dopamine.

Previous studies in the scientific community show that HUFA deficits are correlated with increased addiction disorders. The supplementation with HUFAs compared to placebo has been shown to significantly reduce the dependence on cigarettes, and the number of cigarettes smoked.

Researchers in the United Kingdom recently examined the relationship between maternal fish consumption (as a great source of HUFAs) and perinatal smoking behaviour. They note that this association had not been examined before.The findings of their study were recently published in the British Journal of Nutrition.

For the study, the researchers explored three questions:

They gathered data from the Avon Longitudinal Study of Parents and Children, conducted on pregnant women with an estimated delivery date between April 1991 and December 1992. This study included 9,640 mothers. The dietary intakes of fish and shellfish were self-reported by food frequency questionnaires, at an average gestational age of 32 weeks. Maternal smoking patterns of frequency and cessation were collected through self-reported questionnaires as well. Regression models were used to examine the relationship between these two reported data.

Maternal fish consumption during pregnancy showed lowered smoking behaviour in 3,044 mothers that reported smoking regularly before pregnancy. This association remained, even after adjusting for cofounding variables such as socioeconomic status and education.

The majority of the mothers reported some fish consumption, measured as less than 340g per week. Higher fish consumption, of more than 340g per week, was associated with an even lower risk of smoking. As well, the number of mothers quitting during pregnancy was also positively correlated with increased fish consumption. The researchers attributed these associations to biological effects such as alterations in the dopaminergic system. There was some evidence that high fish consumption lowered the rates of relapse, but the results were not statistically significant after adjusting for cofounding variables.

There were some shortcoming of the study such as the reliance on self-reported data, and having the food questionnaires only filled out at 32 gestational weeks. Furthermore, other cofounding variables are very hard to rule out altogether. Still, these results have important applications for pregnant mothers struggling to quit smoking.

The authors suggest that the recommended daily intake of fish in mothers who smoke could be increased. This can help mothers with reducing or quitting smoking, leading to a healthier baby and mother. The researchers also commented on maternal level of education being a large cofounding variable. This points out the necessity of educating the general public on the devastating effects of cigarette smoke on fetuses. In a broader application, the general public may benefit from an increased fish consumption to reduce addictive behaviours, but further studies are needed to confirm this association on a broader scale.