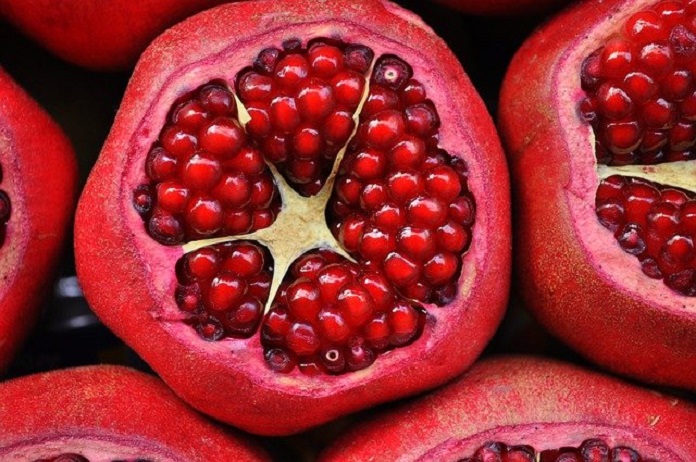 Researchers in the United Kingdom investigated the effects of pomegranate juice on lowering blood sugar levels.

Pomegranates are rich in vitamins A, C, and E, as well as antioxidants. Pomegranates are also an excellent source of fibre and iron. It’s no wonder then that research studies have investigated the effect of pomegranate juice, with positive results – such as lowering blood pressure and improvements in health biomarkers. Researchers set out to see whether pomegranate juice helps mediate the body’s response to sugar after consumption of a high-glycemic index food.

What is the Glycemic Index?

The glycemic index (GI) is a scale used to indicate how a particular food affects blood sugar levels. Foods are assigned a number that can be compared to pure glucose, which has the highest possible GI number of 100.

The GI values of all foods can be classified as either high GI (70-100), medium GI (50-70), or low GI (below 50). The higher the GI value, the more quickly the carbohydrates are broken down in our bodies to be used or stored away.

Carbohydrates that are lower on the GI index, such as vegetables or whole-wheat products, are broken down more slowly and result in a more gradual rise in blood sugar levels, while higher GI foods like soda or sweets cause a drastic spike in blood sugar accompanied by increased insulin release.

Because of the positive effects of pomegranate juice reported in previous studies, researchers from the UK thought that pomegranate juice may actually modulate the body’s responses to high glycemic-index foods. This may be due to pomegranate’s abundance of punicalagin and punicalin, which are the polyphenols that contribute to the unique taste of the juice.

The volunteers were divided equally into the three groups. For all participants, a starting blood glucose measurement was taken they ate the meal. A timer was started at the first bite or sip, and volunteers were given 15 minutes to eat the meal. Blood glucose measurements were taken again every 15 minutes for one hour, and every half an hour for an additional two hours. The measurements were taken with a glucometer, a machine that analyzes blood sugar content from a finger-prick at each time-point.

The results showed that the consumption of 200 mL of pomegranate juice reduced the glycemic response of bread, resulting in slower breakdown and a decreased peak blood sugar level.

Further testing showed that punicalagin, a pomegranate polyphenol, was an inhibitor of human α-amylase in vitro. Since α-amylase is an enzyme that breaks down carbohydrates, its inhibition by the punicalagin in pomegranate juice explains the observed response to high glycemic-index white bread.

This study showcases the potential of pomegranate polyphenols to advance our understanding of glucose metabolism in order to develop medications and strategies to help those with diabetes or obesity. Needless to say, the benefits of pomegranate juice merit further investigation.

Image by megspl from Pixabay