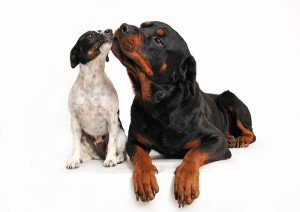 Study reports that dogs can extract and process multiple forms of sensory emotional information from both humans and dogs, shedding light into the evolution of social cognition in mammals

The ability to recognize emotions allows humans to evaluate social cues and direct subsequent behaviour. For both humans and animals, this process is critical for biological fitness. The combination of different sensory modalities expressing the same emotion can reinforce a stronger perception of that emotion. A research group recently investigated whether dogs were able to recognize emotions using multiple sensory stimuli.

Seventeen domestic dogs were presented with happy/playful and angry/aggressive image of a human or a dog paired simultaneously with a sound. The sound, which consisted of a corresponding dog bark or human vocalization, had a positive, negative, or neutral overtone. The dogs stood in front of two screens during each of the two 10-trial sessions while their spontaneous looking behaviour was recorded on camera.

It was discovered that dogs looked significantly longer at the image that matched the tone of the vocalization, and this result was observed irrespective of whether the image/sound pair was human or canine. Dogs, however, seemed to be more sensitive overall to emotional stimuli from their own species. In the case where the stimuli were neutral, dogs did not have a preference for either of the two images. These results suggest that dogs can gather and interpret emotional information from relevant stimuli.

This study was the first to show that dogs can extract and match emotional visual and auditory stimuli from other dogs, revealing that they can differentiate and recognize positive and negative emotions. It also supports the evolutionary and adaptive importance of emotion recognition in social mammals.