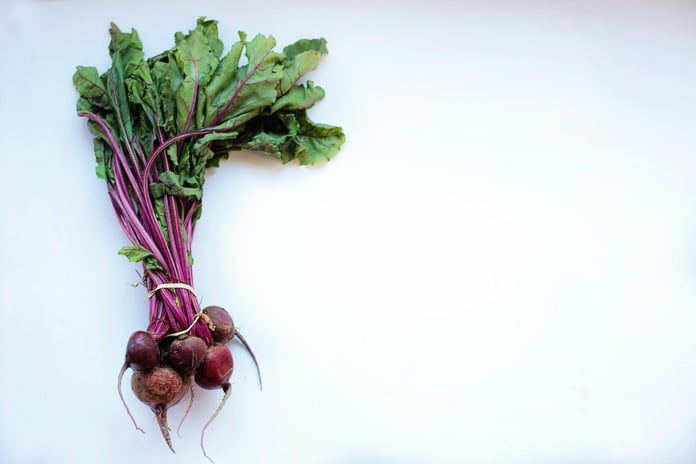 A recent study evaluated the effect of daily dietary nitrate from beetroot juice on individuals with uncontrolled high blood pressure.

Over one billion people worldwide are affected by high blood pressure or hypertension. However, despite advances in medicine, high blood pressure remains uncontrolled in over 50% of individuals being treated with medication. Hence, there is a significant clinical need for a novel therapeutic to target primary and secondary intervention of high blood pressure.

Nitric oxide is a chemical compound that plays an important role in chemical signalling in the body. For example, it plays a key role in maintaining blood vessels and blood pressure regulation. It is known as a vasodilator as it signals the surrounding smooth muscle to relax resulting in the relaxation of narrowed blood vessels and subsequently increased blood flow. In the body, nitric oxide is synthesized through the consumption of dietary nitrate, which can be found in many foods such as spinach, beets, arugula and even dark chocolate or raw cacao. Increasing the consumption of these foods will boost nitric oxide levels.

Dietary nitrate is an important contributor to nitric oxide signalling

As dietary nitrate appears to be an important contributor to nitric oxide signalling, many studies have investigated the potential mechanism and the role it plays in regulating blood pressure. However, conflicting evidence has been reported, with some studies showing an inverse association between dietary nitrate and blood pressure regulation. Many of these studies, however, included healthy, normal-weight males and there is a lack of research including individuals with uncontrolled high blood pressure.

A recent randomized, double-blind, placebo-controlled, cross-over trial conducted by researchers in the Republic of Ireland and the United Kingdom aimed to assess more intensively the effect of dietary nitrate compared with placebo in individuals presenting with or suspected to have uncontrolled high blood pressure. Their results were recently published in the British Journal of Nutrition.

The study included 20 individuals with an average age of 65 years and body mass index (BMI) of 30.7 kg/m2. The participants were suspected or known to have uncontrolled high blood pressure, excluding individuals with controlled high blood pressure and those with diabetes, cognitive impairment, kidney disease, or sleep apnea. All of the participants were prescribed at least one anti-hypertensive medication. The subjects were assessed over a period of seven days and invited to wear a blood pressure monitor for 24 hours on the first day and provide blood samples. They were then randomly assigned to either a seven-day nitrate-rich beetroot juice, followed by a seven-day nitrate-depleted beetroot juice (placebo) or vice versa.  The researchers assessed the blood pressure and blood analysis before and after both seven-day juice treatments.