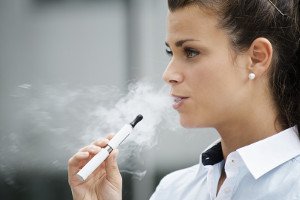 Electronic (e-cigarettes) are advertised as smoking cessation aids and for use in smoke-free places. E-cigarettes are devices that vaporize a mixture of nicotine and other substances to be inhaled by a user and its use is increasing among adults and teenagers. Whether e-cigarettes are effective for smoking cessation or smoking reduction is still under debate. We have previously reported on some of these earlier studies:

The Debate Heats up Over Electronic Cigarettes

A recent paper published in Lancet Respiratory Medicine has reviewed and analyzed the results of previous studies that determined a link between e-cigarette use and quitting cigarettes.

The studies included in the review compared adult smokers who have used e-cigarettes to a group of non-users, either under controlled clinical trials or in real world settings. Analysis of the pooled results from various studies indicated that the odds of quitting smoking after using e-cigarettes were 28% lower than non-users. This means that smokers who have used e-cigarettes were less likely to quit smoking compared to those who did not use e-cigarettes. Similar results were obtained regardless of the reason for using e-cigarettes, whether the smokers intend to quit or not.