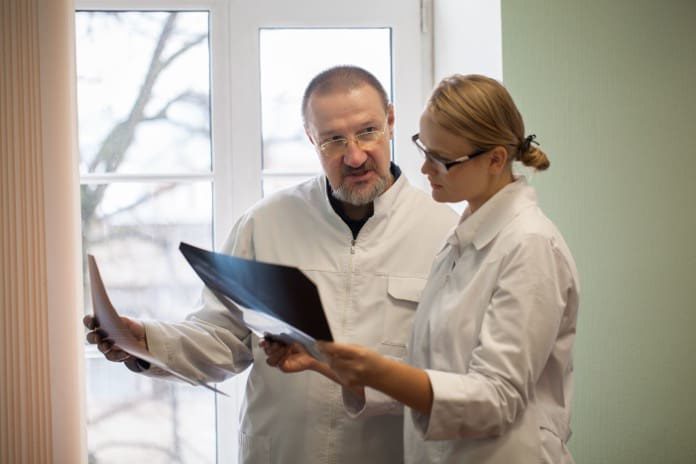 Lung cancers are often difficult to diagnose early on. The screening techniques most commonly employed vary in efficacy and in rare cases can themselves lead to cancer. As such, accurate and low-risk screening techniques are a necessity. Cancers result from changes in the makeup of certain genes or changes to the mechanisms by which cells control which genes are active or inactive, called epigenetic mechanisms.

What is DNA Methylation?

Epigenetic changes describe modifications in the way that genes are expressed, rather than in the genes themselves. One important epigenetic mechanism is DNA methylation. DNA methylation occurs when a methyl group (CH3) is added to DNA. These methyl groups may act to turn genes on or off. For a gene to be used as a blueprint to generate cellular products (i.e. to be active) it must first be read by a molecular structural called a transcription complex. The complex attaches itself to a specific region of the gene, called the promoter, to start this process. The presence of the methyl groups typically blocks the interaction between the transcription complex and the gene, leading to decreased gene activity.

How is DNA Methylation Related to Lung Cancer?

Patterns of epigenetic control differ between cancer types. For example, DNA methylation patterns have been found to differ between lung adenocarcinoma and squamous cell lung cancer. Changes in the process of DNA methylation are found to occur early in squamous cell lung cancer. As such, screening techniques which can identify these patterns may provide a low-risk alternative to the techniques currently available.

In a recent Chinese study published in BMC Genomics, researchers sought to identify patterns of DNA methylation associated with different types of squamous cell lung cancer. The researchers analysed tissue samples from the tumours of smokers and non-smokers for abnormal DNA methylation patterns. They also analysed samples from non-tumour lung tissues for comparison. The study used the production of intermediate cellular products called mRNA to assess gene activity. The study also accounted for patient factors such as age, sex, cancer stage (the degree of spreading), cancer grade (tumour aggressiveness), and the presence of complications.

They analyzed tumours from 24 patients – 19 smokers and 5 non-smokers – were analyzed. The lung tissue of 56 patients without tumours – 48 smokers and 8 non-smokers – were used for comparison. Of the genes found to differ between a tumour and non-tumour tissue, 77% had significantly higher methylation in the tumour group compared to the non-tumour group, and 23% had significantly lower methylation.

Degree of Methylation Greater Among Smokers

The overall degree of methylation was found to be greater in the early stages of the disease, in tumours with a higher grade, among smokers, among those less than 60 years old, and among those who experienced complications. The associations between these factors and methylation tended to be stronger in non-tumour tissue than in tumour tissue. Patients were further grouped according to specific patterns of methylation. Group one consisted mostly of those with early stage, moderate grade tumours. Group two was fairly balanced between stages and grades. Methylation was significantly higher in Group two compared to both Group one and non-tumour tissue.

Methylation of Six Genes May Be Useful for Diagnosis