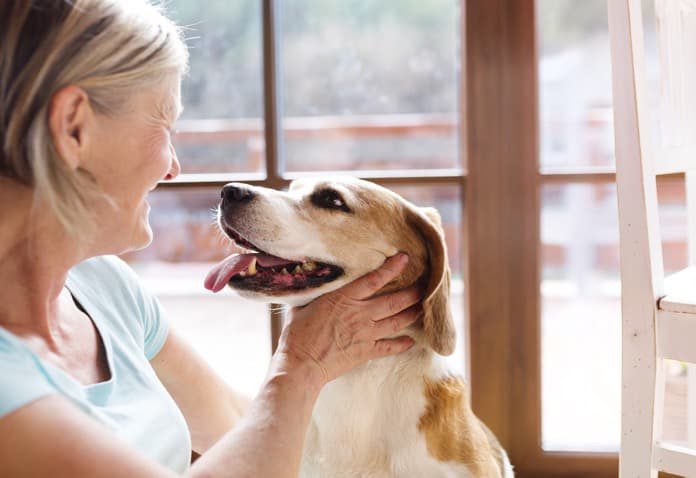 Researchers in the UK systematically reviewed studies on the role and usefulness of companion animals to people living with mental health problems.

Pet owners report feeling less stressed, having an improved quality of life, and greater social involvement within the community (through dog-walking for example) than those without pets. Recent reports have described the relevance of companion animals in the lives of people with severe ongoing mental health problems such as bipolar disease and schizophrenia. Such reports suggest that relationships with companion animals can be considered alongside human relationships in a system of support. This has led a UK-based research team to evaluate the evidence that is currently available that addresses whether having a companion animal, such as a pet, can provide support.

The researchers used a number of sophisticated methods of searching for academic and non-academic studies on the subject of people living with mental health problems and companion animals to investigate this topic, and published their findings in BioMed Central Psychiatry. They found 17 studies that included information on the experiences of people with a mental health problem living with a variety of different animals ranging in size from birds, through to dogs and horses, with the one element in common that they all provided companionship.

The researchers looked specifically at the positive and negative roles that the companion animals played with respect to three categories of work: practical work, emotional work, and work related to having a sense of identity. The researchers also looked at the type of data that was reported. Some data was quantitative, meaning it was reported in terms of numbers or counts. Some were qualitative, being reported in terms of type. The one is not necessarily better than the other but quantitative data is considered more robust for the application of statistical analysis, which many scientists and policy makers prefer for drawing conclusions on data. The category of practical work included housekeeping, personal care, diet, and exercise, but also specific tasks such as taking medicine and making appointments.

Positive Impact on Exercise and Quality of Life

The results showed that dog ownership had a positive impact on physical activity and quality of life. The main way in which companion animals contributed in this category was through distraction from symptoms. That is, the companion animal helps to disrupt attention from upsetting experiences such as hearing voices, panic attacks, or thoughts of suicide. One study that was assessed reported that participants with post-traumatic stress disorder (PTSD) did not report feeling less affected by painful memories but indicated that their pet had tried to cheer them up and maybe lessened the degree of the negative impact of the trauma. One study found that the participants needed less medication because of the contribution of their pet.

Companionship and Source of Comfort

The category of emotional work is related to pets providing companionship and being a source of comfort. The evidence of the contribution of companion animals to this category was mixed. Military veterans with PTSD had reduced depression and improved mood through stroking their pets and close contact.

However, other studies reported neutral or small negative effects of pet ownership. Companion animals were reported in several studies to be able to respond to their owners in an intuitive way, especially in times of crisis or active symptoms. One study reported that people were able to confide in their pet when they were unable to open up to other people. Pets provided a safe environment where people could talk without fear of being judged or being a burden to others. A recurring theme in many of the papers was that pets provided unconditional love and affection, which fostered self-acceptance.

The third category, related to meaning and sense of purpose, suggested that companion animals gave people a meaning and sense of purpose to their lives. This included giving owners a reason to live, and giving individuals hope for the future. A number of studies described the elements of relationships with pets that were important to mental health, including simplicity and reciprocity, pets as understanding and honouring boundaries and not holding past behaviours against owners.

Some negative aspects were also reported, including the financial costs, and the guilt owners experienced if this was not managed successfully. Horses and dogs were considered most in this aspect. This highlighted the importance of matching the companion animal to the individual circumstance. The loss of an animal was also a major source of distress, but the reports did highlight that owners found that joy could still be taken from the memories of their pet.

Most of the studies contained qualitative data, and the research team report that there was a lack of high-quality studies. Quantitative data was often lacking to support the qualitative data. However, the qualitative data described many benefits. On this basis, the researchers raise the point that despite many benefits, relationships with companion animals are not incorporated into healthcare planning. They report the opposite, that people with mental health problems are often steered away from pet ownership due possibly to the additional work it can create for professionals in terms of managing and advising people.

The researchers suggest that the findings of their study call into place a cultural shift in policy whereby companion animals can be incorporated into support systems. However, the researchers discuss that the current emphasis on evidence-based medicine in healthcare makes big changes by commissioners and policy makers unlikely without higher quality research.