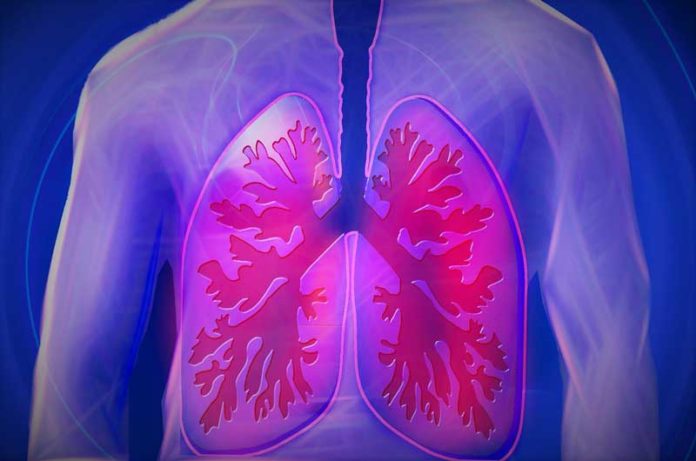 COPD is chronic obstructive pulmonary disease, characterized by inflammation in the pulmonary system and obstructed airflow. It is an umbrella term that covers emphysema, chronic bronchitis, refractory asthma and bronchiectasis. It is hard to identify due to relatively minor symptoms, such as increased breathlessness and coughing, but can eventually lead to respiratory infections, cardiorespiratory problems, and lung cancer. COPD results in a loss of elasticity in the lungs and an inability to fully exhale.

COPD is generally caused by the inhalation of toxins and lung irritants. In the developed world, it mainly stems from chronic tobacco smoking, while in the developing world it can occur due to factory fumes and poor ventilation in homes. 20 to 30 percent of smokers develop COPD, with many more realizing decreased pulmonary functions. COPD can also have a genetic cause, as seen in people missing the gene for alpha-1-antitrypsin (AAt). AAt is a protein synthesized in the liver and secreted into the bloodstream to protect the lungs. People with asthma are also particularly at risk of developing COPD.

Diagnosis and Treatment of COPD

Patients who suspect they have COPD and have a history of smoking, have had prolonged exposure to lung irritants or have a family history of COPD should go to their family doctor to be examined. COPD is generally diagnosed via a simple test called a spirometry. It involves a patient blowing all the air out from their lungs. It then outputs two measurements, FEV1 and FEV6. FEV1 is the amount of air blown out in the first second, while FEV6 is the total amount of air exhaled in one breath. A low FEV1 to FEV6 ratio indicates COPD, becoming more severe as the ratio decreases. Additional tests may be done to determine if there are other lung related disorders causing a patient’s symptoms.

Treatment for COPD depends on the severity of the disease at time of recognition. In minor cases with early treatment, not much needs to be done other than removing exposure to lung irritants, such as smoking, and medications to relax muscles around airways and reduce inflammation, if necessary. In moderate to severe cases, lung therapies may be required to rehabilitate damaged pulmonary tissue.

Finally, in severe cases, surgery may be required. Common surgeries include lung transplants and lung reduction surgeries. While lung reduction may sound counter intuitive, by reducing the amount of lung tissue available, there is more space for the remaining tissue to function normally and efficiently. As the treatment can widely vary depending on disease severity, it is important for people who suspect they may be developing COPD to seek help quickly and look to remove irritants in their environment as soon as possible.