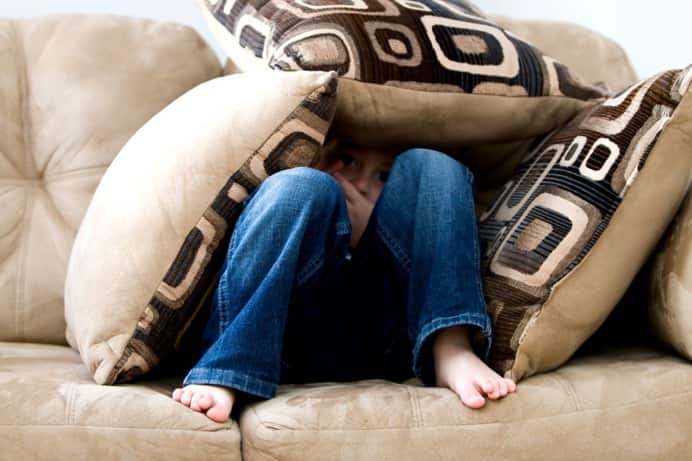 There is strong evidence to support the effectiveness of both cognitive behavioral therapy (CBT) and selective serotonin reuptake inhibitors (SSRIs) when treating childhood anxiety disorders. Researchers compare the two as treatment options

Childhood anxiety disorders are common mental health disorders. The prevalence rates of anxiety disorders in childhood are 15% to 20% and are associated with significant impairment, particularly among 13 to 18 year-olds. In addition to psychological symptoms, children with anxiety experience physical symptoms, such as headaches, stomachaches, muscle tension, or tiredness.  These symptoms will sometimes make them miss school or avoid social activities. With generalized anxiety, children become worried, emotionally numb, or easily irritable and can feel burdened, making life feel overwhelming or out of control. This makes them show signs of wanting to avoid places, people, or activities.  Separation anxiety disorder estimates are between 2.8% and 8%, while specific and social phobias, rates round off at 10% and 7%, respectively.

This systematic meta-analytical study sought to evaluate all the studies done in the past to compare CBT to pharmacological treatments.  The researchers used the databases EMBASE, SciVerse Scopus, MEDLINE, and PsycINFO, along with the Cochrane Database of Systematic Reviews, and Central Register of Controlled Trials. The selected studies were chosen based on research study findings where children were found to have had panic, social, specific phobias, generalized and separation anxiety disorders, and who had received CBT and/or pharmacotherapy. A total of 7,719 patients were included in the study. Females totaled 4,290 (55.6%) with the mean age being 9 years, the range being 5-16 years.

Based on this systematic review and meta-analysis, the findings published in JAMA Pediatrics showed that selective serotonin reuptake inhibitors (SSRIs), serotonin-norepinephrine reuptake inhibitors (SNRIs), and CBT were all effective in reducing anxiety symptoms. From the review, the researchers found that when placebo pills were compared with SSRIs, previous researchers had found that primary anxiety symptoms were initially reduced but with increased remission. Additionally, from the review previous researchers found that SNRIs significantly showed reduced primary symptoms of anxiety. Tricyclics and benzodiazepines were however not found to be useful in reducing anxiety symptoms.

CBT was also significantly helpful and showed a reduction in primary symptoms, remission, and response to children affected by anxiety. In one study, researchers found that CBT was more effective than fluoxetine and improved remission more than sertraline. However, when sertraline and CBT were combined for treatment, it proved to be the most effective in reducing primary symptoms as assessed by clinicians, than when used separately. Some of the reviewed studies revealed that there were opposing effects with medication use only, but not when CBT was combined or they were not as adverse.

The researchers stated that the studies gathered were either small or in some cases too short for a comparison to be made with suicidal tendencies and SSRIs and SNRIs. One reviewed study, however, showed that based on a clinical trial done and, although not significant, that there were suicidal ideations observed with the drug Venlafaxine. Overall, CBT was however associated with fewer dropouts than pills and placebo.

The researchers who did this meta-analysis have concluded that treatment choices should be based on values, preferences, availability of services, and adverse effect profile. There are several treatment options available for childhood anxiety disorders. These include psychotherapy, pharmacotherapy, and combined treatment approaches with treatment guidelines recommend CBT and SSRIs or SNRIs as the best interventions. However, they believe that further research is needed to strongly determine the comparative effectiveness of these treatments or any one such treatment.