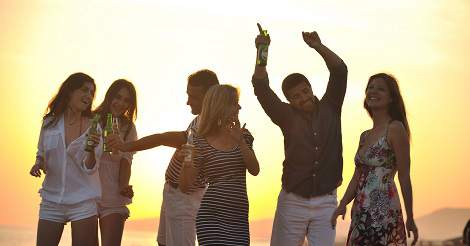 Results from the 2015 CDC Youth Risk Behaviour Survey reports that youths are still engaged in risky sexual behaviour as well as behaviours associated with unintended injury and chronic disease.

The leading causes of mortality and morbidity among youth and young adults aged 10-24 years old in America are motor vehicle crashes, unintended injury, homicide and suicide. These leading causes have been categorized into 6 priority behaviours by the U.S Centre for Disease Control (CDC): 1) behaviours that contribute to unintentional injuries and violence, 2) tobacco use, 3) alcohol and other drug use, 4) sexual behaviours related to unintended pregnancy and sexually transmitted infections including HIV, 5) unhealthy dietary behaviours, and 6) physical inactivity. To monitor priority health-risk behaviours that contribute to the morbidity and mortality of teenagers in grades 9-12, the CDC, along with a variety of education and health agencies, have since 1991 conducted yearly national, public and private school-based Youth Risk Behaviour Surveys (YRBS) concerning 118 health behaviours.

Prior to the 2015 YRBS administration, parental permission was obtained for participating students. Students completed a 99 question survey during one class period which included demographic, height, weight, asthma, and behavioural questions. Answers were restricted to their behaviours 30 days to 12 months prior to the survey, and strategies were implemented by the CDC to over-sample Black and Hispanic youths within the surveyed population to extract race and ethnicity data. A total of 15,624 surveys were examined for this report.

The results of this study are extensive, and detailed results can be found here. Of note, it was discovered that in the year 2015, 41.5% of students who drove a car had texted or emailed while driving, 32.8% had drunk alcohol, and 21.7% had used marijuana. Many teenagers were engaged in risky sexual behaviours, and of those who were currently sexually active, 11.5% have had more than 4 partners. In contrast, 59% of surveyed students had never had sexual intercourse. The survey also revealed that many students were engaged in activities which were associated with chronic diseases such as cancer, cardiovascular disease, and diabetes. 30 days prior to the survey, 10.8% of students had smoked cigarettes, and 7.3% had used smokeless tobacco. Within a week of the survey, 5.2% had not eaten fruit, and over 40% had played video games or used a computer for a non-school related purpose for 3 or more hours on an average school day. Furthermore, 14.3% had not participated in at least 60 minutes of physical activity a day, and 13.9% and 16% were obese or overweight, respectively.

In comparison to data from previous surveys, there are a number of clear trends. While smoking, alcohol use, fighting, and sexual activity have decreased among students, the prevalence of other behaviours like using marijuana, using smokeless tobacco, attempting suicide, and not eating vegetables have remained the same or increased. Technology-dependent risk behaviours that have emerged within recent years, including texting while driving, using e-cigarettes, and cyber-bullying, also show a negative impact on teenage health.

The data collected from this survey represents a key resource for the CDC to plan, implement and evaluate public health policies, programs and practices. These questionnaires facilitate the analysis of relationships between behaviours among youth such as the co-occurrence of smoking and drug use, and due to the long history of YRBS, enable the identification of national long-term temporal trends and trends in specific subgroups.Behaviours