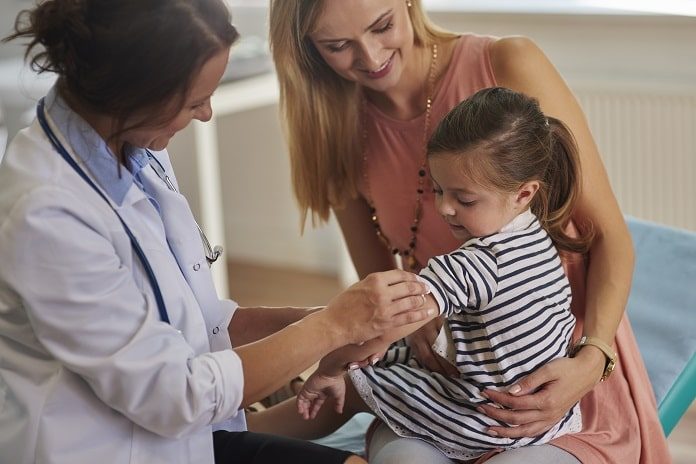 Researchers investigate what effect the measles vaccine has on child growth, cognition, and schooling outcomes.

Measles is a highly contagious virus and is spread through the air via spit droplets when an infected person coughs or sneezes. The first symptoms start to develop seven days after infection. These include; fever, lethargy, coughing, stuffy nose, and conjunctivitis (inflamed eyes or pink eye).  The iconic rash then starts with small spots appearing behind the ears and on the face moving down toward the torso and finally spreading to the limbs. This doesn’t sound like the dramatic hospital scene we first imaged, measles doesn’t sound that bad?

The trouble with measles is that it works by infecting immune cells that travel throughout the body, this means that multiple organs are subject to infection, which can result in numerous side effects. Complications include; otitis media (inflammation of the middle ear), which can result in deafness, corneal scarring that can result in blindness, croup, diarrhea and pneumonia. The measles virus suppresses the immune system and as a result, patients are vulnerable to secondary infections such as bacterial pneumonia, which can be deadly. Measles can also cause encephalitis –  a swelling in the brain that can result in brain damage and death. Infants and toddlers under the age of five are at a high risk of experiencing these complications. There is no antiviral treatment for measles and doctors can only treat symptoms as they arise. In the case of measles, prevention is definitely better than cure.

The measles vaccine is what is known as a live attenuated virus. The vaccines were developed by growing the measles in chicken cells for a long period of time. This produced a weaker strain of the virus that is harmless. The attenuated virus is still able to replicate but does not cause the same devastating illness seen with a normal measles infection. The idea is that the vaccine primes the immune system to recognize measles so that it is able to mount a swift response if it encounters the virus. An immunized patient has life-long protection against infection. The measles vaccine is an injection given to children when they are nine months old and a second booster shot is given at fifteen to eighteen months. The measles vaccination has worked incredibly well, during 2000-2017 it prevented 21.1 million deaths. In 2002, America eliminated measles proving that immunizations were a practical and effective strategy to protect against measles infection. Recently, however, there has been a resurgence of measles outbreaks both in America and Europe. The main factors contributing to these outbreaks are vaccination hesitation and world travel.

There is growing concern regarding the safety of vaccinations, which prevents or delays concerned parents from vaccinating their children. Common side effects observed from the measles vaccine include fever, rash, and pain at the injection site. There are rare instances of febrile seizures, which are seizures caused by fever. These seizures do not have long-lasting health implications. Thrombocytopenia is another rare side effect, this is a low platelet count that is often transient. There is a large focus on the potential adverse side effects associated with measles vaccinations recently however, there has been some interesting research done on the potential benefit associated with the vaccine.

In a recent US study published in Vaccine, researchers wanted to know if the measles vaccine had an impact on cognition and schooling outcomes. They were also interested in whether or not the vaccine affected growth and development. The researchers focused their study on children in Ethiopia, India, and Vietnam. The scientists used information gathered from the Young Lives study and looked at information from 2000 children in each country. They divided children from each country into vaccinated or unvaccinated groups. They then compared cognitive ability, schooling indicators, and growth between the two groups when the children were 7-8 years old and again when they were 11-12 years old. The researchers used height, weight, and BMI scores to measure growth. They used standardized tests to measure cognition, these included Peabody Picture Vocabulary Test (PPVT), mathematics test, early-grade reading assessment (EGRA), and two binary measures (ability to read and write). The schooling attainment was measured by the grades received by the children. The group found that there was an association between getting vaccinated and having a higher cognitive function, better grade attainment, and better growth.

The study presented is observational and there are inherent biases in this type of study. Confounding factors such as nutrition, schooling resources, the health status of the children, and environmental factors that could affect the study outcomes were not taken into account. The conclusions drawn by this type of investigation should be considered with healthy skepticism as the outcomes indicate an association, not a causal relationship. It is also important to note one of the authors openly declared a conflict of interest and received financial donations from several pharmaceutical companies that produce the measles vaccinations.

With these limitations in mind, it is promising to think that there may be additional benefits to the measles vaccine beyond that of preventing a deadly disease.