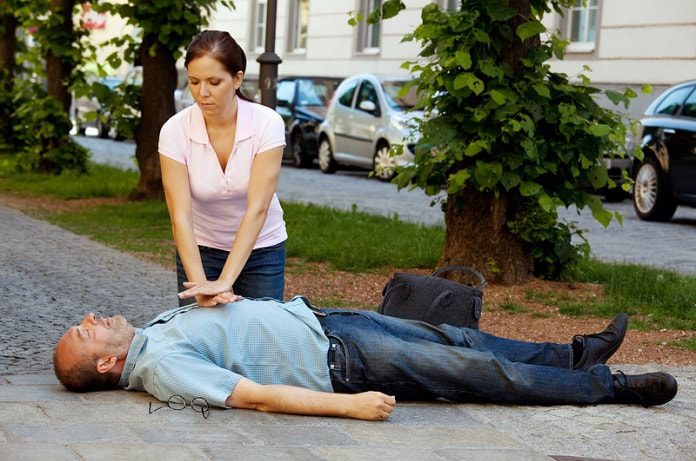 Individuals who suffer cardiac arrests can have neurologic outcomes that can significantly impact their functionality and quality of life, most often due to brain damage caused by lack of oxygen during a cardiac event. Danish researchers found that in the event of an out-of-hospital cardiac arrest, early resuscitative efforts by bystanders are associated with improved cardiac arrest survival outcomes.

The study by Kragholm and colleagues, published in the New England Journal of Medicine, sought to examine the effect that bystander interventions had on the long-term functional outcomes of survivors of out-of-hospital cardiac arrests. This observational study included patients 18 years of age or older listed in the Danish Cardiac Arrest Registry. Patients residing in nursing homes or who had anoxic brain damage (damage due to oxygen deprivation) prior to the out-of-hospital cardiac arrest were excluded from the study. Data from the time period between 2001 and 2012 was obtained from 2855 patients who were 30-day survivors of an out-of-hospital cardiac arrest. Researchers obtained follow-up data for the patients from nationwide registries. Utilizing data on the incidence of out-of-hospital cardiac arrest and the functional outcomes of patients after cardiac arrest, they assessed three possible outcomes in a 1-year follow-up period in 30-day survivors: (1) brain damage due to oxygen deprivation or admission into nursing home (a possible indicator of brain damage), (2) death from any cause and (3) a composite endpoint (whichever came first of the three: anoxic brain damage, admission into a nursing home or death). Risk of outcomes was analyzed with respect to the type of intervention the survivors received: bystander cardiopulmonary resuscitation (CPR), bystander defibrillation or no resuscitation.

The results support the notion that bystander interventions improve cardiac arrest survival outcomes. The authors conclude that recipients of bystander interventions were more likely to be 30-day survivors compared to those that did not receive interventions and noted that those receiving no intervention had the highest risk of brain damage or admission to a nursing home. Furthermore, intervention by bystanders, whether through the administration of CPR or defibrillation, was associated with a significantly lower risk of brain damage or nursing home admission in out-of-hospital cardiac arrest patients. The use of automatic external defibrillators (AEDs) was associated with the lowest risk. Additionally, the risk of death from any cause was significantly lower among 30-day survivors who received bystander CPR or defibrillation, with the lowest 1-year risk of death in patients who received defibrillation intervention. The authors also noted significantly increased rates of bystander interventions (either CPR or defibrillation) among 30-day survivors during the 2001-2012 timeframe. They suggest this increase is likely due to the nationwide initiatives that have been taken in Denmark on multiple fronts, such as, widespread CPR training (both mandatory and voluntary) and the placement of AEDs in public places.

Given that the study was observational in nature, there is the possibility that other factors associated with the bystander interventions and outcomes could have influenced the study’s results. A second limitation is the lack of complete datasets for some patients, which could mask significant differences between the patients in the study. Third, there was no detailed information available on functional status, relating to neurologic disability or quality of life, although the authors suggest that the outcomes they measured likely reflect neurologic impairment which has been correlated with low quality of life. Lastly, the use of more generalized registry data does not account for the thresholds set by individual clinicians in diagnosing anoxic brain damage. Despite these limitations, the study does point to the value of raising public awareness and advocating for education in first aid measures which are geared towards cardiac events. The administration of chest compressions (CPR) and the use of an automated external defibrillator can maintain oxygen flow to the brain and reduce the likelihood of neurologic impairments due to oxygen deprivation. Educating the public on administration of CPR or use of a defibrillator in emergency circumstances, and making these devices easily accessible to the public will likely improve survival outcomes for individuals who experience out-of-hospital cardiac arrests.