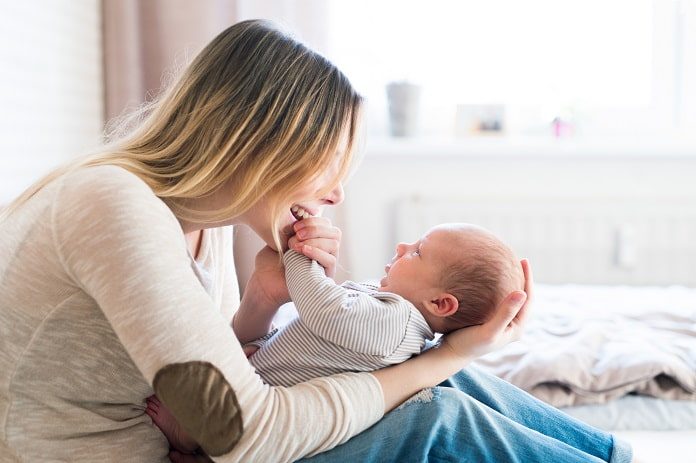 In a recent study, researchers found that relaxation techniques used during breastfeeding improves weight gain and sleep in infants.

Early infancy is a pivotal time for growth and development in a child. Breastfeeding provides the ideal source of nutrition for growing infants and is associated with numerous long and short-term health benefits for mother and baby. In the short term, breastfeeding is critical for protecting children against infectious disease and can prevent illnesses such as diarrhea, respiratory infections, and otitis media (inflammatory diseases in the middle ear). The long-term benefits of breastfeeding include lower blood pressure and cholesterol in children. Not only are there benefits for the children who are breastfed but benefits to mothers include lower rates of breast and ovarian cancers, improved birth spacing, and reduced risk of diabetes. The World Health Organization (WHO) recommends that mothers exclusively breastfeed their children for six months to ensure optimal growth, development, and health.

Despite these benefits and recommendations from WHO, roughly 13% of American mothers breastfeed their children. Stress and anxiety felt by the mother can affect how long she can breastfeed and can even prevent lactation. Numerous hormones are responsible for causing and maintaining lactation after birth. Perhaps the most important hormone that plays a role in both stress regulation and milk production is cortisol.

Cortisol is more commonly known for its role in regulating stress responses, it is primarily involved in controlling the ‘fight-or-flight’ response. Interestingly, after birth cortisol has an additional job, it works together with prolactin to signal the cells in the breast to start producing milk.  Studies have shown that breastfeeding reduces cortisol levels, which return to normal soon after feeding has stopped. This is thought to promote calmness and nurturing behaviors in the mother. Disruption of cortisol regulation through increased stress and anxiety (either acute or chronic) can affect both milk production and a mother’s willingness to breastfeed. This suggests that relaxation techniques during breastfeeding may help improve breastfeeding success.

In a recent Malaysian study published in the American Journal of Clinical Nutrition, scientists wanted to know if using relaxation techniques during breastfeeding would have an impact on the health of both mother and child. The researchers followed 64 first-time mothers who gave birth to healthy full-term infants. They ensured the mothers exclusively breastfed their children. The mother and infant pairs were monitored for 14-18 weeks after birth. Women were randomly assigned to either a relaxation group or a control group. The women in the relaxation group were asked to listen to a relaxation therapy audio recording while breastfeeding or expressing milk. The researchers then recorded data on the mothers’ level of anxiety, breast-milk consumption, milk cortisol levels, and growth in the children for both the control group and the relaxation therapy group. These measurements were taken during four home visits at 2 weeks, 6-8 weeks, 12-14 weeks, and 14-18 weeks.

Relaxation during breastfeeding improves weight gain and sleep in infants

The relaxation therapy presented here holds some promise for improvements to the health and development of mother and child. There are some important constraints to consider for this investigation. The evidence presented in the trial was presented for either 6-8 weeks or 12-14 weeks, with no evidence reported for 14-18 weeks. This calls into question whether these health benefits are only short-term effects. The data collection for this study was incomplete and there were problems collecting diary entries from the mothers participating in this trial as well as the loss of some urine and saliva samples, preventing their inclusion in milk intake analysis. There were challenges with including women who expressed their milk, this was not part of the trial design and women had to be excluded from certain analyses. Consequently, only eleven participants from the relaxation group and eight from the control group were included in the milk intake analysis, resulting in very small sample sizes and lack of statistical power. The entire trial was also relatively small with only 31 mothers participating in each group, all of whom were highly educated first-time mothers, suggesting the results may not hold true to larger, diverse groups of women.