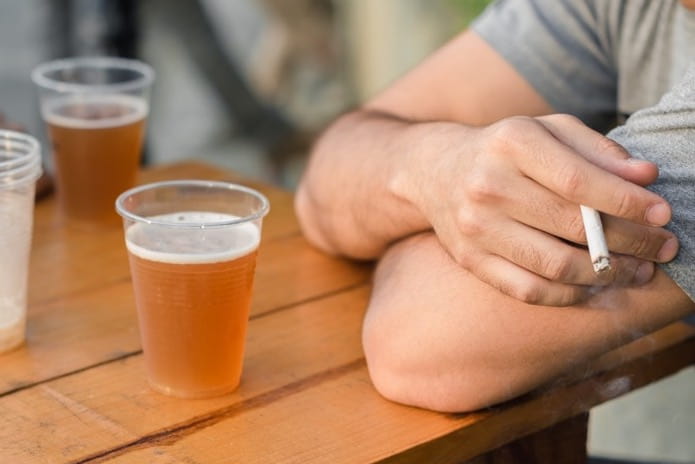 Researchers compared brain imaging in smoking and drinking to investigate why people become addicted to nicotine or alcohol.

According to the recent World Health Organization (WHO) statistics, the use of cigarettes and alcohol is widespread, with estimates of over 1.1 billion smokers worldwide and 2.3 billion people who are current drinkers. These high-risk behaviors can lead to serious health problems – around 7 million people die each year from tobacco-related illness.

It is important to understand what underlies the development of these addictive behaviors. Researchers at the University of Warwick investigated whether there are functional brain differences in people who smoke or drink alcohol. They recently published their findings in eLIFE.

The researchers examined data from the Human Connectome Project which involved performing functional magnetic resonance imaging (fMRI) brain scans in the general population. fMRI measures how different parts of the brain are communicating by looking at brain activity when a person is at rest. The pattern of activity shows which parts of the brain are working closely together and which parts are less well connected. The researchers compared the brain connectivity patterns of over 800 people who were smokers or drinkers.

Smokers’ fMRIs showed low overall connectivity between brain regions. In particular, they had weaker connections between two brain regions that help people to change or stop a behavior (lateral orbitofrontal cortex and inferior frontal gyrus). This may make it difficult for people to stop smoking. In addition, the nicotine in cigarettes has stimulating effects which may improve communication between different parts of the brain. So smokers may find that smoking helps them to overcome underlying brain communication deficits.

The extent of brain connectivity changes in drinkers and smokers was related to the amount of alcohol and nicotine they consumed. Furthermore, brain changes were detectable even in people smoking only a few cigarettes or drinking one unit of alcohol a day.

The researchers compared the Human Connectome Project fMRIs with those from the IMAGEN brain scanning study to validate their findings. From this comparison, they also noted that the brain changes seen in smokers and drinkers were already present in 14-year-olds who would go on to drink or smoke at age 19. This suggests that functional connectivity differences in the brain may make people more likely to smoke or drink.

Understanding brain changes may help in the prevention of substance addiction

Professor Jianfeng Feng, one of the study’s lead authors, commented, “These are key discoveries that advance our understanding of the neurological basis of smoking and drinking.” He added that these findings may have future implications for prevention and treatment of smoking and drinking addiction behaviors.