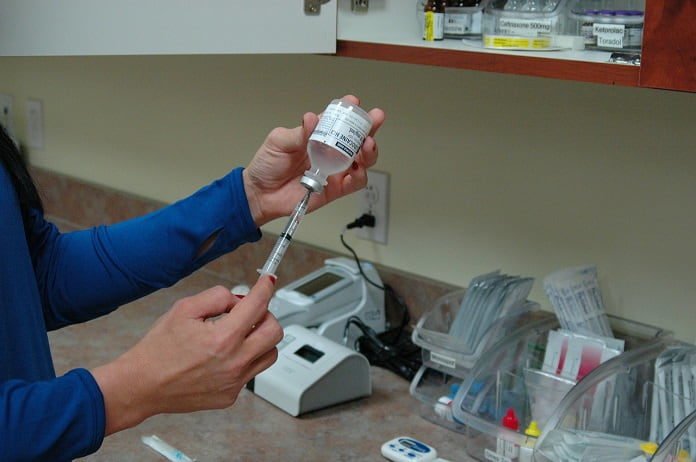 A recent study by Yaro and colleagues investigated the persistence of antibody levels following a meningitis vaccination campaign in Burkina Faso, Africa to predict if and when a booster vaccine might be necessary.

The African meningitis belt spans across sub-Saharan African and is plagued by recurrent epidemics of meningococcal meningitis, a lethal bacterial infection that affects the brain and spinal cord. In 2010, the Meningitis Vaccine Project successfully developed a meningitis vaccine called PsA-TT against Neisseria meningitidis (NmA), the main bacterial strain responsible for these epidemics. The vaccine was introduced through a mass vaccination campaign and has resulted in a significant reduction of NmA-associated meningitis. However, it is unclear how long the meningitis vaccine will provide protection and when an additional vaccine booster may be necessary.

Based on current clinical studies, researchers believe that the vaccine should provide protection for at least 10 years, but these estimates may not translatable to the general population. The absence of natural immune boosters and immigration from unvaccinated countries may contribute to discrepancies between the estimated and actual duration of protection. Furthermore, there are methodological limitations to the clinical studies that make it difficult to predict exactly how long the meningitis vaccine can provide protection against NmA.

Yaro and colleagues conducted a study to investigate the population-level persistence of antibodies against NmA in Bobo-Dioulasso, nearly five years after the initial vaccination campaign was initiated. The authors recruited a total of 599 and 647 participants for their 2013 and 2016 surveys, respectively. They published their results in Clinical Infectious Diseases.

To assess protection against NmA, they collected blood samples from each participant and measured antibody levels. The investigators measured antibodies against the NmA bacteria reference strain F8236(SBA-ref), NmA strain 3125 (SBA-3125), and the NmA-specific immunoglobulin G (IgG). Analysis was conducted by comparing antibody levels over five years between participants divided into different age groups.

Based on these data, the authors predict that older individuals’ antibody levels will return to pre-vaccination levels after 11 years based on SBA-ref and SBA-3125, and 9 years based on NmA-specific IgG. In contrast, younger individual’s antibody levels are predicted to return to pre-vaccination levels after 12, 8, and 6 years, based on SBA-ref, SBA-3125, and IgG, respectively.

In conclusion, the current study found a steady decline in antibody levels following a single dose of the meningitis vaccine and suggests the eventual need for a vaccine booster in the future. However, to accurately predict when this booster would be necessary, researchers still need to determine which antibody indicator best predicts protection against meningitis. Some recent studies have suggested that antibodies against the NmA strain 3125 may be the best predictor against meningitis, but this requires further validation.

Nonetheless, the current study is a good step towards determining when an additional meningitis vaccine booster might be required and provides a greater understanding of improving global control of meningitis.