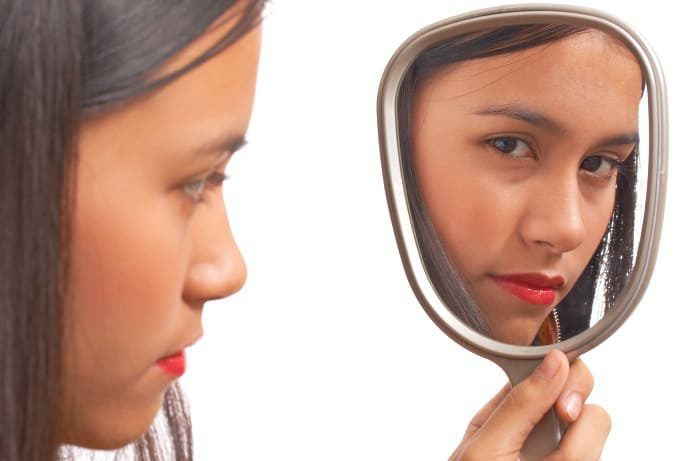 How we feel about ourselves may impact what we pay attention to in the world around us. Researchers evaluated whether young women who had either a positive or a negative body image would pay more or less attention to weight-related words.

Body image is an important part of an individual’s sense of self.  Researchers have shown that a sense of dissatisfaction with one’s own body is linked to relationship difficulties, early sexual activity, self-harming behaviours, and suicidal ideation. A negative body image is also linked to eating disorders in adolescent girls and women. This is particularly relevant in North America where as many as 72% of women report some sense of body dissatisfaction.

How Does Our Attention Impact Our Body Image?

Researchers at the University of Calgary conducted a study to investigate how attentional biases were related to levels of body satisfaction and if exposure to images of thin models would exaggerate any attentional biases.

How Do We Process Information Related to Weight?

There have been mixed results from previous studies that have evaluated how women with and without eating disorders process information related to weight.  Some studies have indicated that women with eating disorder differentially pay attention to fat-related content while ignoring thin related words or pictures.  Other studies have found that women who are dissatisfied with their body image pay greater attention to any weight-related words, including both fat and thin-related words than they do neutral words.

In this study, the participants, who were either satisfied or unsatisfied with their bodies, were shown a series of words that were either thin related, fat-related, or neutral, followed by images of thin models and then the series of words again. They were then reevaluated on their body image, or level of body satisfaction. The researchers used eye-tracking devices to measure how much attention each participant gave to either thin or fat related words. The researchers predicted:

A total of 78 women, mostly undergraduate students, participated in this study that took place at the University of Calgary in Canada. Of these women, 40 were in the “body dissatisfied” group and the remaining 38 were in the “body satisfied” group, based on the results of a questionnaire. The body-satisfied women had, on average, lower body mass indexes than the body-dissatisfied women. The researchers used eye-tracking devices to measure how much time each participant spent gazing at each word on the screen. The results of this study were recently published in the journal, PLoS ONE.

Attention to Fat and Thin-Related Words

This was true, in fact, even before viewing the images of thin models. The images of models, although they impacted the level of satisfaction that the women felt with their weight, did not necessarily impact the amount of attention that they spent on weight-related information. This indicates that these women did not need to be “primed” with media portrayals of thin models in order to experience attentional biases.

This study showed that body unsatisfied women paid more attention to both fat and thin-related words than body satisfied women. This study demonstrates that those with a negative self-image pay more attention to weight-related information than those with a positive self-image. Interestingly, the study showed that this effect was not altered by priming with weight-related images, but was evident even with a lack of priming. The images did, however, affect the degree of dissatisfaction felt by these women.

This study confirms that exposure to thin-related media images reinforces a poor body image. It also contributes to the body of literature indicating that women who are dissatisfied with their bodies are more likely to pay more attention to weight-related information, leading to a self-perpetuating cycle of attention and negative emotions. This study indicates that prevention programs that aim to moderate the attention of at-risk women should focus on both fat and thin related content, instead of solely on thin-related content. Additionally, this study also provides direction for future research, as this phenomenon could possibly extend to all body related words, not just weight related words.