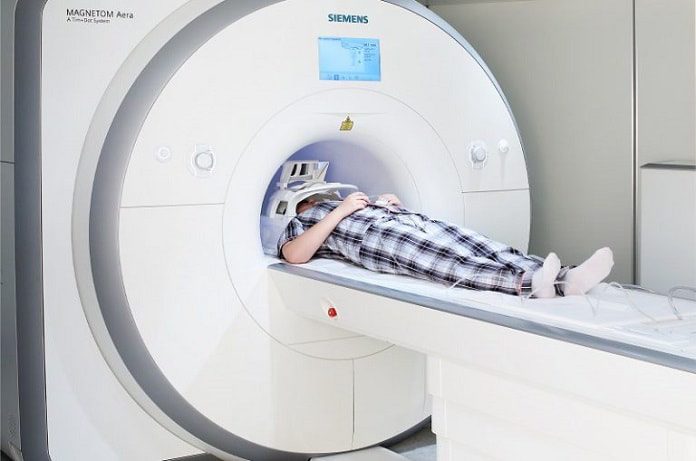 A collaborative team of biomedical engineering researchers have designed a metamaterial which is compact, flexible and easy to integrate into clinical MRI scanners. The metamaterial improves MRI functions, leading to greater sensitivity and images with higher signal-to-noise ratios.

Magnetic Resonance Imaging (MRI) is one of the most common and useful medical imaging modalities used in hospitals today. Unlike an X-Ray, an MRI allows physicians and researchers to image soft tissue in the body, allowing them to probe for anatomical anomalies such as tumor masses or torn ligaments. In addition, it is a relatively non-invasive technique that does not use ionizing radiation or require the addition of any labelling or radioactive agents to form an image. An MRI works by combining a very strong magnetic field and radio frequency waves to act on tissue in the body. The magnetic field allows hydrogen atoms in the body to absorb and emit the radio waves, which can be detected by a coil placed very close to the patient. There is an abundance of hydrogen atoms in the human body, particularly in water and fat, enabling the MRI to generate detailed images. By varying the pulses of radio waves transmitted, clinicians can achieve different contrasts in the image.

One of the most important factors in any kind of imaging is the signal-to-noise ratio (SNR). This is essentially a measure of how strong the actual signal is as compared to the background. Improving this parameter in a technique such as MRI is a goal of biomedical engineering researcher. An augmented SNR has more than just technical implications. Practically, it can mean cutting down on imaging time and amplitude of radio waves, which can translate into a more comfortable patient experience and a lower energetic burden on the instrument. One of the most promising platforms for improving SNR in MRI are metamaterials. Made from a combination of elements, these are engineered materials which have properties that are not found in nature, such as the way they interact with and affect electromagnetic radiation. These properties are due to a very small scale repeating 2D or 3D pattern, which allows them to block, absorb, enhance or bend waves in unique ways.

Pilot studies using metamaterials in conjunction with MRI have been carried out as proof of concept. However, these applications have revealed several drawbacks, such as a large size and lack of flexibility when integrated with the MRI. Since the signal detector must be placed very close to the patient’s body, any device intended for practical use would have to be compact and easy to implement with existing instruments. A team of physicists and radiologists from the Netherlands, Russia and Australia have reported the development of such a material in a recent issue of Nature’s Scientific Reports. This hybrid metamaterial is made of a combination of copper metallic strips (the surface) and a mineral called calcium titanate (the substrate). The substrate is only 8 mm thick, and the material is designed to fit between the patient and the radio frequency receive coil array (signal detector). The metamaterial improves MRI imaging by acting on both the transmission and receiving functions of the instrument. It focuses the magnetic field in a specific area, allowing higher efficiency of the transmitted radio frequency field, and in turn improves the image SNR due to a higher receive sensitivity.

To test their device, the researchers started with phantom simulations and experiments of a sample filled with mineral oil, a homogenous substance which does not induce any constructive or destructive wavelength effects. They tested this sample with no metametrial, only the calcium titanate and then with the copper metasurface on top, and found that both the simulation and experimental data showed an increase in SNR by a factor of 3 for the metamaterial. They then did a similar simulation and experiment using an electromagnetic model of a human head as well as 4 human volunteer subjects. This time they ran the experiments with 1) no metamaterial 2) the copper surface 3) the calcium titante 4) the entire metamaterial. For the metamaterial, they found that the average transmit efficiency increased by a factor of 1.6, and the receive efficiency increased by factor of 1.9.

The authors note that despite the advantages of the material’s flexibility with regards to practical applications, this bending could affect the frequency at which signal is detected and they did find a slight shift in this parameter. In addition, they mentioned that it is difficult to predict the effect of local positioning of the device on individual human subjects, as head size and shape varies from person to person. However, overall they state that the ability to fine-tune the properties based on the thickness, strip length and dielectric permittivity of the metamaterial shows great potential for further advances in this domain of biomedical engineering.