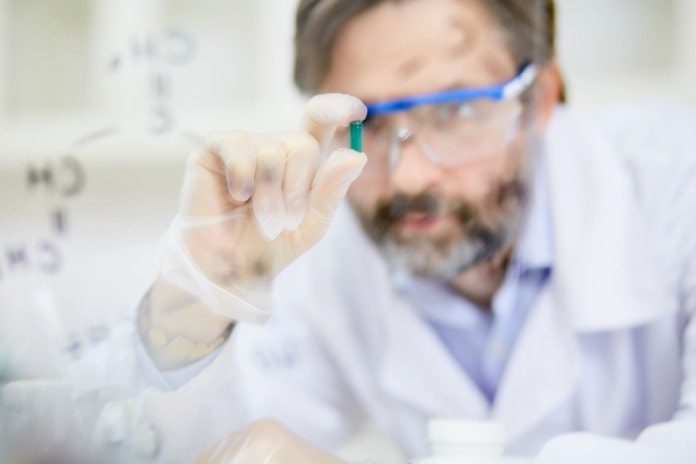 Scientists have developed a novel bacterial based system as a tool to painlessly diagnose gastrointestinal conditions.

Engineers and scientists from Massachusetts Institute of Technology (MIT) in Massachusetts, USA, have developed an oral pill that could revolutionize the way we diagnose and manage gastrointestinal conditions. Diagnosing serious gastrointestinal conditions (for example drug-induced bleeding or ulcers) often requires using painful endoscopic methods, which are tiny cameras hooked up to a long winding tube that is inserted into the gut of the patient through oral or rectal route.

The capsule is an ingestible micro-bioelectronics device (IMBED). At the heart of this capsule is a small chamber that houses bioengineered bacteria sandwiched between a porous membrane and an optical detector to capture light signal. These bacteria are non-toxic and akin to what is typically found in pro-biotic capsules taken to promote a healthy gastrointestinal environment.

The investigators carried out extensive testing of this system using a pig model to monitor gastric bleeding induced by painkiller indomethacin. The whole cell bacterial biosensor was designed to detect heme, a protein that is elevated when there is excessive bleeding induced by painkillers. The bacteria were also engineered to have a special transporter that allows this protein to be internalized.

The bacteria carry a small DNA cassette that is hooked to light producing gene. As the heme docks on to the DNA cassette engineered inside the bacteria, it turns on the expression of genes that produce tiny light signals (bioluminescence). In absence of heme the system remains in a “turned-off” condition and therefore no light is produced. This light produced by the interaction of heme with the DNA cassette is then detected by ultra-small optical detectors that are housed adjacent to the bacteria. The study showed remarkable results allowing for very precise detection of heme in pigs that had painkiller induced bleeding in the gut. What is even more exciting is that the pill houses small transmitters that allow for wireless transmission of the light signal to an external device such as a laptop or a mobile.

The scientists then engineered the system to detect substances other than heme that may be released into gut under pathological conditions. The system was able to detect acyl homoserine lactone (AHL) a compound that has been suggested to be found in gut following bacterial infections. Similarly, the system was also tested to detect thiosulfate, a compound which research suggests is frequently elevated in conditions of gut inflammation. What is particularly impressive is that the sensor can withstand the acidic environment that is present in the gastrointestinal tract. Their results have been published in Science.

The authors suggested that such biosensors could be particularly useful in conditions where access with endoscopic methods is limited. Another potential advantage is direct detection of compounds in the gut that may be rapidly degraded before being excreted in the stool. The group is now focusing on broadening the application of the sensor to include detection of other compounds and pathological conditions.

Another focus of their research is to miniaturize the pill further to allow for easy ingestion of the device. However, given that the device is still the early stage of prototype testing, additional testing at preclinical and clinical phases will be required before it can be commercialized for human applications.