Home Diet Is the Bioavalability of Carotenoids Dependent on Supplemental Dietary Calcium? 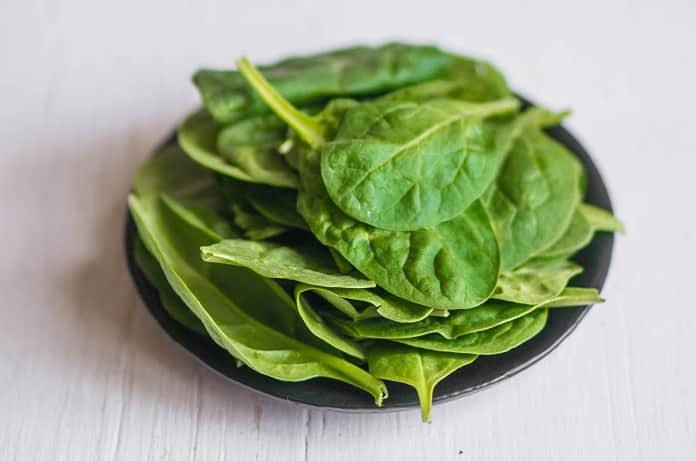 Recent research investigates the effect of calcium supplements on the bioavailability of carotenoids consumed from spinach rich food.

Carotenoids, which are natural pigments found in orange fruits and vegetables as well as in kale and spinach, are associated with a protective effect on human health. The beneficial effects depend on both the absorption from food and the bioavailability– the final concentration of carotenoids in blood circulation after consumption. Previous evidence suggests that Calcium ions may reduce the bioavailability of carotenoids by interfering with a process called bile emulsification.

Several studies have shown the protective effect of carotenoid-enriched food on some cancers, cardiovascular health, metabolic complications, and all-cause mortality. Health benefits are most likely conferred through vitamin A uptake, which is synthesized from the beta-carotene compound of carotenoids. Previous observations showed that the bioavailability of carotenoids depends on food composition and diet enriched with lipids and low in dietary fibers increases bioavailability. As beta-carotene is not soluble in water (or blood), the prerequisite for its absorption is bile emulsification. As suggested and demonstrated in-vitro, bi-valent minerals such as Calcium can interfere with emulsification through binding and neutralizing bile salts.  A recent study, published in the British Journal of Nutrition, tested this hypothesis in human subjects.

The authors recruited 25 healthy, non-vegetarian males, between 18-50 years of age, and whose BMI was less than 30. All participants were informed about the study design and its purpose and voluntarily signed an informed consent form. The study was designed as a randomized, cross-over, double-blinded trial, during which participants acted as their own controls. In a crossover type of study, the participant receives the trial treatment (in this case food enriched with carotenoids with or without calcium), and after the washout period (one week) the reciprocal treatment is given, making the participant a control for himself.

Blood samples were obtained at baseline and at each clinical visit. The study included 3 clinical visits with a washout period of one week in between. Participants were asked to keep their diets low in carotenoids for two weeks before the first visit and during the washout periods. During the clinical visit, each participant received a trial meal composed of a spinach-based food with either 0mg, 500mg, or 1000mg of Calcium supplements. The blood samples (7 samples/visit) were processed and the carotenoid composition and concentration were assessed and calculated based on commercial standards.

The area Under the Curve (AUC) – a measurement used in clinical trials to summarize drug/compound concentration over time, showed no difference in the concentration of carotenoids in blood following three identical meals (3 visits) served with 0mg, 500mg or 1000mg Ca supplements.  The authors suggest that the in vitro effects haven’t been observed in vivo possibly due to the body’s ability to compensate for the bile salts bound to supplemental Calcium. Interestingly, another recent study showed a decrease in 80% in lycopene (also carotenoid pigment) bioavalability consumed from tomato paste, after supplementation with 500mg Ca.

To summarize, this study found no effect of calcium supplements on the bioavailability of carotenoids consumed from spinach rich food. The fact, that the bioavalability of carotenoids consumed from different food source were significantly affected by calcium supplements, puts this topic on hold till more evidence will come available.

No influence of supplemental dietary calcium intake on the bioavailability of spinach carotenoids in humans, Joana Corte-Real, British Journal of Nutrition, 2017