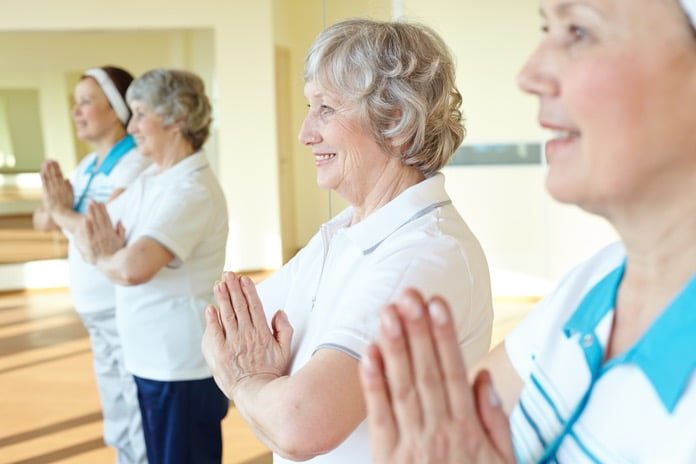 A new study in the journal Restorative Neurology and Neuroscience sheds new insights into the benefits of yoga for arthritis patients.

Rheumatoid arthritis (RA) is a chronic, systemic, inflammatory disease that typically manifests with the swelling of the small joints, particularly in the hands and feet. RA affects both the physical and psychological health of patients. Common symptoms and associated conditions of RA include joint stiffness and pain, fatigue, muscle loss, and depression.

It is estimated that around 16% of individuals with RA in the US experience depression. Such high prevalence is worrying since depression leads to mental distress and decreases patient compliance and adherence to medical treatment, which worsens the health outcomes of RA patients.

Exercise has been widely researched for its potential to improve mobility and depression symptoms in RA patients. Although the results of the different studies are not all in agreement, the majority supports a positive effect of aerobic and resistance exercises in muscle function, disease progression, and depression symptoms.

However, few studies have evaluated the effect of physical activities that involve meditative practices like yoga on the wellbeing of RA patients, and fewer still have analyzed the effect of yoga in RA patients at the molecular and cellular level.

What are the effects of yoga at the physical, psychological, and cellular levels?

A new study, recently published in the journal Restorative Neurology and Neuroscience, analyzed the effects of intense yoga practice on the depression severity and the biomarkers associated with RA and cellular stress on RA patients.

The study included 72 RA patients being treated with DMARDs, which are a combination of drugs usually prescribed to treat RA. The researchers randomly divided the 72 patients into either the yoga group or the control group. The yoga group practiced a special 2 hour-long yoga routine five days a week for eight weeks, while the control group was not instructed to do any changes in their lifestyle, which was mainly sedentary.

The results of the study showed that after eight weeks of yoga practice, the 18 biomarkers that reflect the severity of RA and cellular health improved in a small but significant manner.

The lead investigator of the study, Rima Dada, MD, PhD, Professor, Department of Anatomy at the All India Institute of Medical Sciences (AIIMS), New Delhi, India explained in a press release, “Our findings show measurable improvements for the patients in the test [yoga] group, suggesting an immune-regulatory role of yoga practice in the treatment of RA. An intensive yoga regimen concurrent with routine drug therapy induced molecular remission and re-established immunological tolerance. ”

In agreement with previous findings, the study determined that the psychological health of the patients in the yoga group improved markedly with the 8-week yoga program. This improvement in mental health was reflected in an increase in the patients’ compliance and their ability to perform daily chores.

Altogether, the results of this study clearly demonstrate that the patients in the yoga group benefited from practicing the intense regimen of yoga in addition to their normal pharmacological treatment. The new findings also suggest that the visible effects of yoga on RA might be associated with the effects of yoga on cellular health and systemic inflammation.

But is yoga better than other forms of physical activity for alleviating physical and psychological symptoms of RA patients? Unfortunately, this study cannot answer this question because the researchers compared a group practicing yoga with a group that did no physical activity. Therefore, the changes observed in the study group cannot be solely adjudicated to yoga; they could be the result of any similar form of exercise.

As Dr. Dada concluded, “This study offers a new option. Pharmacological treatments can be supplemented with alternative and complementary interventions like yoga to alleviate the symptoms at both physical and psychosomatic levels.” Further studies are needed to determine whether the effects observed in this study are particular to yoga, or whether they may be replicated with other forms of physical activity.