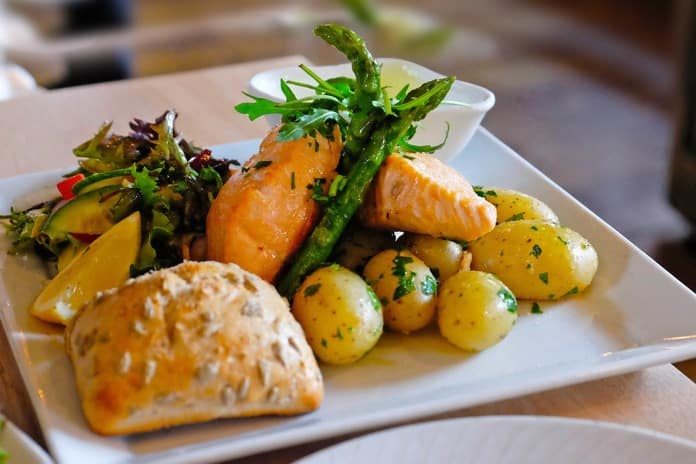 In a recent study, researchers examined whether an asthma diet including more fish is beneficial for children with asthma.

Asthma is a respiratory disorder that reduces the quality of life. It is one of the most common worldwide respiratory afflictions. As a result, there is a great need to find suitable treatments for asthma.

Among other factors like dust and pollution, diet can be partially responsible for the emergence of asthma. It is believed that a healthy diet, with less processed foods and more vegetables, fruit, and fish, can help prevent asthma in younger individuals. One diet that generally meets these criteria is the Mediterranean diet. The Mediterranean diet encourages eating habits that include fewer sweets as well as moderate levels of fish.

Certain types of fatty fish provide omega-3 fatty acids. Previous observational studies on a fish diet in young children (up to 14 years of age) have suggested that a fish diet can help prevent asthma because of the omega-3 fatty acids and perhaps other nutrients like antioxidants. However, this link has yet to be concretely proven. Because of this, a recent study by Papamichael and colleagues sought to see if they could establish a link between omega-3 fatty acids and asthma prevention through a Mediterranean diet with more fish in Greek children with asthma. They sought to establish an asthma diet plan and published their study in the Journal of Human Nutrition and Dietetics.

This study was a randomized controlled trial that ran for six months. There were two groups. One group had a modified asthma diet plan that incorporated two full fish meals per week (about 150g) while the other group followed their normal diet plan. A questionnaire on food intake, further tests and consultations contributed to establishing proof of adherence to the diet plan and also served as adequate checkups.

A diet with more fish has some benefits on asthma

Overall, 31 children received the fish asthma diet plan and 33 had their regular, normal diet. At the six-month mark, the researchers confirmed that the fatty fish group had higher levels of omega-3 fatty acids compared to the control group (i.e. the normal diet group).

The researchers also did scores to compare the quality of life between the fatty fish group and the control and found no significant differences between both groups. Spirometry measurements, used to test pulmonary function, were no different between the groups – from baseline measurements to the six-month mark – as well. There was significantly less bronchial inflammation in the fatty fish group after adjusting for certain confounding variables.

Reduced bronchial inflammation may be associated with eating more fish

There were a few limitations to the study. There was a short follow-up time of only six months and the study had arguably limited power. The questionnaire responses could have been biased. There may have also been other variables at work which could affect the significant findings in this study in ways unknown. Examples of such variables include tobacco exposure and socioeconomic status.

Overall, the authors suggested that the reduction in bronchial inflammation seems to be associated with eating at least two 150g fish meals weekly while on a Mediterranean diet. The authors state that the potential benefits of the high fish asthma diet plan in the specific parameters seen in this study should be further assessed and replicated in other studies for people with asthma. Treating asthma continues to be a priority.

Do the Macronutrients in a Mother’s Diet Affect the Baby’s Birth...

Does high-fructose corn syrup cause asthma?