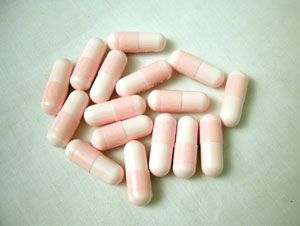 The use of microorganisms and their products has been recognized in medicine for over 200 years.  Since the discovery of penicillin, antibiotics (isolated substances produced by bacteria, fungi, and other microbes) have become the staple treatment for a variety of bacterial infections, such as common colds, syphilis, tuberculosis, salmonella, and forms of meningitis.  Probiotics, on the other hand, are live bacteria, usually delivered to the patient via concoctions of fermented dairy products.  Probiotics influence the complex network of interactions that are present among the microbial populations in the human gut and thereby can have either a positive or a negative effect on the organism.  Currently, they are in use to treat diarrhea, lactose intolerance, inflammation, cardiovascular disorders, and colon cancer, among other conditions.

Both antibiotics and probiotics have recently gathered medical attention as possible treatments for nutritional disorders.  Below is a summary of some recent research findings, and some questions that have arisen for future consideration.

Metabolism in the human body represents an extremely complex set of reactions in balance.  Obesity develops when the balance between the intake of food and the body’s expenditure of energy is in some way disrupted.  A variety of causes have been hypothesized; among them, sedentary lifestyle, increased consumption of dietary fat, social contagion phenomenon, family background, and genetics.  One aspect of health that has been implicated with obesity is the imbalance in gut microbiota.  Colonies of microorganisms in the digestive tract contribute to the absorption of food, as well as the harvesting and transport of energy.  Imbalances in the microbiota may cause abnormalities in these processes, leading to obesity.  Various infections with external microbes have also been associated with obesity.  Studies with childhood exposure to Chlamydophila pneumoniae, Selenomonas noxia, Helicobacter pylori, Herpes simplex virus 1 and 2, Tropheryma whipplei, and Adenovirus 3G, have reported higher rates of obesity.  Unlike obesity, severe undernourishment is chiefly the problem of the developing world.  Approximately 30% of the global population is affected, a large portion of these being children.

The link between weight and antibiotics has been examined in some clinical studies.  The following are the results of the most current research on this topic:

In general, antibiotics administered to newborns within the first 6 months of life were highly correlated to childhood obesity.  Antibiotics given in the following period of 6 – 23 months were not tied to increased risk of obesity, however.

Likewise, probiotics have also become a hot topic for research related to obesity and malnutrition.  As subsequent research findings show, some strains are capable of increasing weight, while others act to reduce it.

The field of research for antibiotics and probiotics as agents for weight gain or loss is new and full of inconclusive findings.  Although antibiotics act to resolve discrepancies in the microbiota balance in the short-term, their long-term use may actually lead to permanent harmful changes within the patient.  Due to the complexity of the internal microbial system in the human digestive tract, the effects of these treatments are often unpredictable.  Below is a list of matters that necessitate further research.

*  Some naturally present gut microorganisms may be depleted or completely eradicated.

*  Bacteriocins are chemicals secreted by bacteria that kill other bacteria.  When antibiotics are overused, resistant strains of intestinal bacteria may begin to produce bacteriocins, which are harmful to other strains in the natural microbiota; this, then, offsets the delicate balance of the system.  On the other hand, bacteriocins may also be used to treat harmful infections.

*  Variations in efficacy of probiotics among different individuals have not been examined yet.

*  Few studies on the adverse effects of probiotics have been conclusive.  Long term effects, especially, are considerably under-researched.  In fact, in the absence of properly conducted research, generalizations made about probiotic treatment led to the following injuries.

Despite gaps in knowledge, the market for probiotics is constantly expanding.  In light of the obvious lack of clinical information and potential hazard of these therapies, some scientists suggest reclassifying probiotics as drugs.

*  The use of antibiotics as growth promoters in the farming industry is a firmly established practice.  This method, however, deserves research into the potential adverse effects on humans who consume meat from these animals.

Interest for the use of antibiotics and probiotics as potential treatments for obesity and malnutrition is on the rise;  future studies are set to potentially clarify the issues raised here.