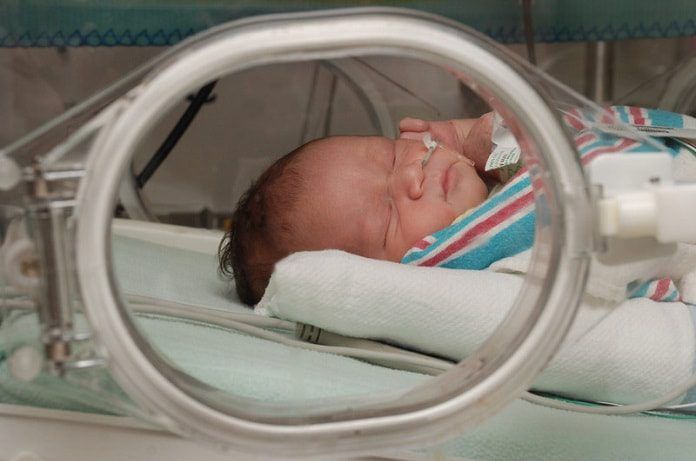 Antenatal corticosteroid (ANS) administration can reduce morbidity and mortality in very preterm infants even when given <24 hours before birth. There are increased risks of negative health outcomes when ANS is given more than 5-7 days before birth.

Preterm birth, or birth before 34 weeks gestation, has been said to affect 15 million babies worldwide each year. It has long been suggested that giving steroids to pregnant women who are expecting a preterm delivery has many health benefits for the infants. Generally speaking, maternal antenatal corticosteroid (ANS) administration is considered as one of the most important and effective obstetric interventions to decrease both morbidity and mortality in premature babies. In the lung, for example, giving ANS to mothers at risk of preterm delivery may reduce the possibility of their babies developing respiratory distress syndrome by helping to produce pulmonary surfactant. This surfactant will decrease the surface tension on the lung preventing the small airways (called alveoli) from collapsing during inhalation and exhalation.

JAMA Pediatrics recently published an article investigating the specific time intervals that were associated with reductions in neonatal morbidity and mortality when mothers with expected premature deliveries were given steroids. In the Effective Perinatal Intensive Care in Europe (EPICE) study that included 4594 singleton pregnancies, data was collected between 2011 and 2012, and analysed by Norman, Mikael et al. in 2016. In order to participate in the study the women needed to have pregnancies between 24 and 31 weeks gestation that were without severe anomalies and not exposed to repeat antenatal steroid treatments. The researchers were interested in determining the association between the amount of time between steroid injection and delivery of very preterm infants, and morbidity and survival rates.

Of the participants included in the study, there was an average gestational age of 28.5 weeks, and the average birth weight of the infants was 1213 grams. Researchers collected information from the neonates about the dates, times, and total number of ANS injections. Based on the exposure time of ANS injection to the delivery of the infant, each case was classified into one of 4 categories: no ANS, first injection <24 hours, first injection between 24 hours and 7 days, and first injection > 7days. Various steroid protocols were utilized, however, two 12-mg injections 24 hours apart was the most common (85.4% of the participants) with betamethasone being the steroid used 78.9% of the time.

Very premature infants are at increased risk of developing severe complications and the authors wanted to investigate a few of them. Of particular interest, Norman, Mikael et al. analyzed the data in hopes of finding telling information for 3 neonatal outcomes: In-hospital mortality, defined as death before the infants were discharged home; severe neonatal morbidity, defined as retinopathy of prematurity, cystic periventricular leukomalacia, and intraventricular hemorrhage (IVH), or severe necrotizing enterocolitis (NEC); and severe neonatal brain disease.

The results showed that for all intervals of ANS administration there was some benefit and decrease of infant mortality when compared to those who did not receive any ANS, in other words, being given any ANS was associated with lower infant mortality than not giving ANS at all. The largest risk reduction was found when maternal steroids were given between 24 hours to 7 days before delivery. On the contrary, when mothers were given steroid injections more than 5-7 days before delivery, their infants had increased mortality (40%) and more risk of severe neonatal brain injuries like intraventricular hemorrhage grade 3 or 4, or cystic periventricular leukomalacia. Further findings suggest that infant mortality was reduced when mothers received ANS injection just a few hours before delivery. This finding challenges previously established preconceptions that giving steroids < 24 hours before delivery is suboptimal and ineffective. In this study, most women (77.9%) who delivered within 24 hours of ANS only received one dose of the injection, which opens additional discussion as to the benefits that may exist from a single steroid injection.

A limitation of the study was that the EPICE database lacks the ability to track the amount of time that existed between admission and administration of the steroid. The study also did not provide reasoning for why certain pregnant women were not treated with ANS. The strengths of the study include its large size and diverse population that enables it be generalizable to a wide range of populations.

In conclusion, there are several health benefits associated with ANS administration that begins just a few hours before delivery, especially in women at risk of birthing very preterm infants. The administration of steroids to women who deliver more than 7 days after injection poses greater risks for neonatal morbidity and mortality, and is an important point to note in women at risk of very preterm deliveries.