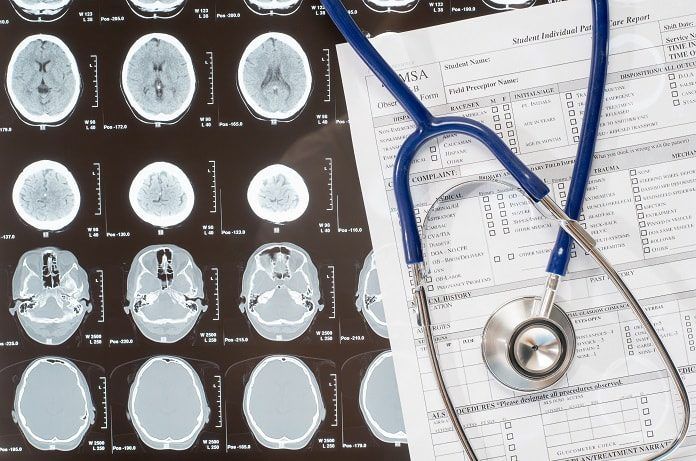 A new study has developed a method of classifying the amount of amyloid deposits in the brain on a continuum, and studied the association between amyloid levels and cognitive decline over 4 years. The results show that this approach can predict cognitive decline in otherwise healthy people.

One of the major hallmarks in the pathophysiology of neurodegenerative diseases such as Alzheimer’s is the development of amyloid plaques in the brain. Amyloids are aggregated proteins that can accumulate and form insoluble fibrils, damaging nearby tissue and causing a number of neurological symptoms. Some amyloids can act as toxic templates, recruiting otherwise normal proteins and forcing them into a conformation which increases the size and number of plaques. Whether the initial aggregation of protein, the eventual formation and deposition of plaques, or some stage in between are actually responsible for the virulence of these diseases is still an open question. However, with several exploratory treatments entering clinical trials, accurate diagnosis and prediction of disease progression can yield important information for clinicians.

Using Positron Emission Tomography (PET), doctors and researchers can now image the brain of patients in an effort to diagnose diseases such as Alzheimer’s. The technique works by detecting a specific form of electromagnetic radiation called gamma rays which are emitted by a radioactive element. By coupling this element to a molecule that binds to amyloids, areas of the brain that display amyloid signatures will light up under a PET scan. This technology has allowed researchers to study the relationship between amyloid deposits and cognitive decline, and to better understand risk factors for dementia. To date, most studies have taken a dichotomous approach and classified individuals as being either amyloid-positive or amyloid-negative based on a determined threshold. However, that classification may be an over-simplification of an amyloid state that actually exists as a continuum, meaning that some information linking a person’s amyloid status to their cognitive state over time may be lost. A study looking at the dose-response relationship between amyloid and cognitive decline could prove more useful.

A collaborative team of researchers from the United States, Germany and Canada have taken just this approach in a recent paper published in JAMA Neurology. They conducted a 4-year longitudinal study in which 174 participants from the Dallas Lifespan Brain Study were assessed for amyloid deposits and followed up with for evaluation of cognitive decline. The study included 174 subjects who were 40 to 89 years old. In addition to using the dichotomous classification approach, they measured the degree of amyloid deposits using a metric called the standardized uptake value ratio (SUVR). They looked at cognitive measures such as episodic memory, processing speed, vocabulary and a test called the Mini-Mental State Examination (MMSE). They also evaluated differences between the traditional dichotomous approach and the continuous approach, and the effect of the subjects’ age on the results.

The results showed that at high and moderate SUVR levels, there was indeed a dose-response relationship between the level of amyloid deposits and episodic memory, a key symptom of Alzheimer’s. They also found this relationship was present for other cognitive variables like processing speed, vocabulary and MMSE. When they analyzed their data using the dichotomous approach, they recorded inconsistent results depending on the threshold used, a major weakness of this method. Finally, when looking at subjects in the 40-to-59 year age group, they initially recorded a dose-response relationship, but then noted that it occurred mainly because of a few outlier subjects. Interestingly, these subjects were positive for two copies of a gene called APOE ε4, providing qualitative evidence to support other findings that this may be a predictive factor for the development of Alzheimer’s in younger patients.

The authors cited several limitations, including the fact that all subjects were recruited based on being healthy, and therefore no assessments of clinical function are available as they progress towards various levels of cognitive impairment. However, overall this study showed that a continuous analysis of amyloid burden can be predictive of longitudinal cognitive decline in a dose-response relationship.