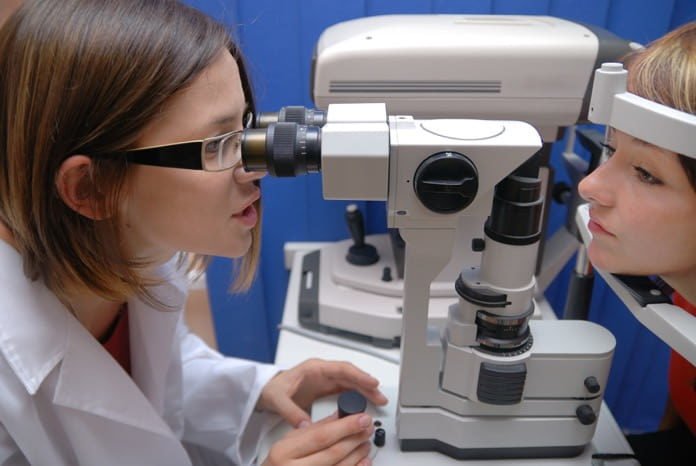 Advances in recent Alzheimer’s research has shown that one day the disease could be predicted during an eye exam.

Alzheimer’s disease affects an estimated 5.4 million people in the United States. It is the most common form of dementia and is an irreversible, progressive brain disorder. It causes problems with thinking, memory and behavior, and eventually, even the simplest of tasks become difficult for Alzheimer’s patients. There is no cure for Alzheimer’s. Current Alzheimer’s research is investigating ways to detect and diagnose Alzheimer’s earlier.

The changes in brain tissue include the loss of neurons, brain atrophy and the formation of tau tangles and beta-amyloid plaques. However, a diagnosis of Alzheimer’s typically occurs only after these changes have occurred in the brain. Significant brain damage can occur for up to two decades before any symptoms such as memory loss or behavioral changes appear.

Recent studies have shown that in the period prior to being diagnosed with Alzheimer’s, known as preclinical Alzheimer’s disease, changes in the brain are already occurring although symptoms may not be showing. Currently, to diagnose Alzheimer’s PET scans and spinal taps are used. These procedures are expensive, time-consuming and invasive and are therefore not typically done as routine clinical screening. Therefore, highlighting the need for new screening techniques which may help decide which patients need to undergo these more extensive tests.

Previous studies examining the eyes of people who had died from Alzheimer’s have shown signs of optic nerve degradation and thinning in the center of the retina. Everyone has an area without blood vessels at the center of our retinas and this area is responsible mostly for precise vision. This zone lacking blood vessels has been observed as being significantly larger in preclinical Alzheimer’s patients. Detecting these changes in the eye could, therefore, be used in the early detection of Alzheimer’s in patients who are yet to display any clinical symptoms of the disease.

A recent study by researchers at Washington University in St Louis looked at whether a non-invasive technique known as optical coherence tomography angiography could be used to detect these eye alterations in people who were not displaying any clinical Alzheimer’s symptoms. The eye test, which shines light into the eye, enables the doctor to measure the thickness of the retina and fibers in the optic nerve. The use of angiography enables doctors to distinguish blood cells from other tissue in the retina. Their results were published in the journal JAMA Ophthalmology.

The study included 30 patients in their mid-70s who were participating in The Memory and Aging Project at Washington University’s Knight Alzheimer’s Disease Research Center. None of the patients included in the study were cognitively normal and not showing any clinical symptoms of Alzheimer’s. All participants were given eye exams using optical coherence tomography angiography. They also underwent PET scans and/or a spinal tap to determine whether they had biomarkers which would suggest preclinical Alzheimer’s.

The results of the PET scans and spinal taps showed that over half of the participants in the study had elevated levels of beta-amyloid proteins and tau. These participants were diagnosed with preclinical Alzheimer’s. Significant thinning of the center of the retina was also observed in these patients. Along with the area at the center of the retina being significantly larger. This change suggests less blood flow to the area. Given the brain and retina are interconnected, any changes in the brain could cause changes also in the cells in the retina. However, patients whose retinas appeared to be normal also had normal PET scans and spinal taps.

These findings indicate changes occur in the retinas of individuals with preclinical Alzheimer’s at early stages of the disease. This Alzheimer’s research suggests using this new non-invasive technique, it may be possible one day to use eye tests to screen people much earlier for markers indicating they may be at high risk for developing Alzheimer’s. Further larger scale studies are required to replicate these results and validate them. However, the results are promising and if Alzheimer’s is detected earlier, this offers the opportunity to start treatments earlier and delay further damage to the brain.