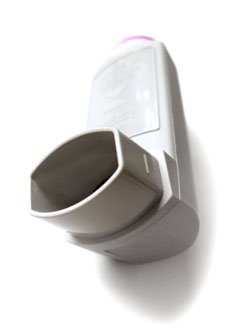 The 20th century witnessed the development of aerosol medicines; these drugs are delivered via a notably different route than more commonly used oral tablets, capsules, or intravenous injections.  Administered by inhalation through the lungs, these drugs have largely remained specifically targeted for the treatment of lung diseases.  Inhalant β2-adrenergic agonists and corticosteroids are widely used to treat diseases like asthma and chronic obstructive pulmonary disease.  This now familiar usage is currently expanding and pharmacological research is offering glimpses into the future applications of pulmonary medicine in everything from central nervous system disorders to cancer.

Whereas traditional drug administration methods such as oral tablets and injections must first bypass the digestive metabolism and are spread evenly throughout all the body tissues on which they act systematically, pulmonary medications have the advantage of delivering highly concentrated doses to specific areas in the lungs with minimal effects on the rest of the body.  Further advantages over injections include less risk of needle injuries, and the independent ability of the patient to use these drugs without help from skilled nurses.  The large surface area of the lung allows for rapid absorption of the drug into the bloodstream; it is precisely here at the air-blood barrier that the most  current research into pulmonary medicine is taking place.  One of the principal challenges is to prolong the sustainability of the drug in the lungs before it is absorbed into the blood.  Such lengthy sustenance is desirable for increasing the duration of drug action, reducing dosage frequency, and improving patient compliance.

A plethora of pharmacological methods is being implemented in the design of pulmonary medications.  The standard aerosol consists of dry powders comprised of fine particles.  Nowadays, nanotechnology and PRINT technology are widely utilized to enhance the particles’ aerodynamic properties.  Prodrugs are formulations designed to increase the solubility of the drug across the air-blood barrier in the lung, where most of the present challenges in pulmonary medicine are centred.

Oral drugs that treat disorders of the central nervous system are rapidly inactivated after passing through the liver.  To avoid this, and to extend the drug’s active time, pulmonary formulations are being developed and tested clinically.  The following are currently undergoing Phase 2 clinical trials:

–        Morphine and fentanyl for analgesia

–        Loxapine and prochlorperazine for migraine

Inhalation is also an attractive option for treating mental conditions like schizophrenia and bipolar disorder, as well as smoking addiction, where nicotine can potentially be delivered into the blood through the lung as fast as cigarette smoke.

The lung environment is optimal for absorbing certain biomolecules like peptides and proteins.  These make up the active ingredients of many biopharmaceuticals.  One popular example is insulin for the treatment of diabetes.  Pulmonary insulin, known as technosphere insulin, is undergoing clinical development by several companies at this time.  Other peptides in clinical research are:

–        calcitonin and parathyroid hormone for osteoporosis

Diseases like cystic fibrosis, associated infections, and other inflammatory disorders of the lungs are the next candidates for pulmonary treatment.  These medications contain fragile ingredients such as antibiotics, prostacyclins, peptides, proteins, and nucleotides, and will therefore require very complex formulations.

Finally, chemotherapy for lung cancer may benefit from being delivered through inhalation, as the aggressiveness of these drugs on other bodily tissues can then be minimized.  Phase 1 and 2 clinical studies are underway in patients with advanced lung cancers mainly to test whether the endurability and efficiency of chemotherapy can be improved by pulmonary routes of administration.

What is being researched?

Various techniques for protecting the drug from degradation, cleaving it with enzymes, and timed release of the compound via release carriers known as liposomes are being utilized.  Another way to improve the solubility of the drug is with the use of excipients, or inactive substances used as fillers.  Among approved excipients, lactose, glucose, mannitol, and some phospholipids are most common.  Bile salts, fatty acids and, most promising in terms of safety, cyclodextrins are being assessed clinically.  Another interesting approach is the use of the body’s own alveolar macrophages, which are white blood cells that attach to the drug and aid in spreading it all throughout the treated area.  With so many available options for research and development, pulmonary medicine remains an exciting future possibility awaited by many doctors and patients.