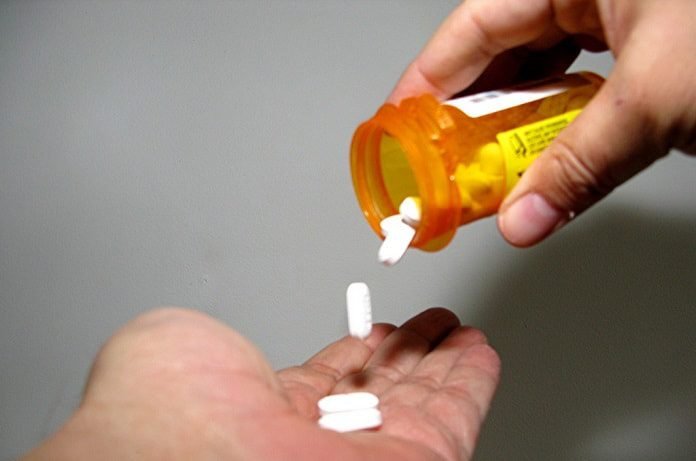 A recent study investigated the role of the neurokinin pathway in opioid-related addiction and pain relief. The findings suggest that the addictive and pain-relieving effects of morphine are partly carried out by permitting the neurokinin pathway member Substance P to stimulate the release of dopamine in the ventral tegmental area of the brain.

The increasing prevalence of chronic pain and opiate abuse highlights the ever-present need for effective yet non-addictive pain relief. An improved understanding of the mechanisms behind opiate-related pain-relief and addiction may lead to the development of such medications.

The opiate morphine binds to opioid receptors (OR), blocking the release of gamma aminobutyric acid (GABA) from certain neurons (brain cells), in turn releasing the brake on neural pathways involved in pain-relief, relaxation, and euphoria, among other effects.  In response to pain, Substance P (SP) is released from certain neurons and binds to the neurokinin 1 receptors (NK1R), activating pathways involved in addiction as well as pain sensitivity and response. Notably, both morphine and SP in the midbrain have been shown to increase release of dopamine. As such, the neurokinin pathway may contribute to the addictive and pain-relieving effects of morphine.

In a 2017 study published in Molecular Psychiatry, researchers sought to establish a link between the pain-relieving and addictive effects of morphine and the neurokinin pathway, with respect to conditioned behaviours, pain sensitivity, and levels of SP and dopamine in the ventral tegmental area (VTA) and nucleus accumbens (NAc) – connected midbrain structures implicated in addiction factors such as motivation, reward, and associative learning. Experiments were conducted using male Sprague Dawley rats and male ICR mice. For VTA and NAc experiments, probes were inserted into the skulls of the rats, allowing direct access to the VTA, and indirect access to the NAc which receives neural projections from the VTA.

To establish the effects of morphine on the neurokinin pathway, 10mg/kg morphine, or saline for comparison, was injected into rats abdominally. Changes in levels of SP in the VTA were analyzed. In the first hour after treatment, morphine treatment increased levels SP release in the VTA 76.1% compared to 5.3% for saline (control) treatment. SP release, however, returned to pre-treatment levels after the first hour.

To investigate the role of NK1R in morphine-induced dopamine release, rats were administered saline, 10μM of the GABA neuron-blocker bicuculline, 35mM morphine, or 35mM morphine + 10mM of the GABA neuron-stimulator muscimol directly into the VTA. Morphine increased SP release in the VTA 36.8% higher than pre-treatment levels in the first hour compared to a decrease of 6.2% with saline injection. In the second hour, morphine and saline increased SP release by 72.0% and 8.7%, respectively. In rats administered morphine + muscimol, SP release was only 16.1% higher than baseline; however, in the presence of bicuculine, SP release was 99.3% higher, compared to 19.9% lower in saline-treated rats.

Conditioned place preference (CPP) tests were conducted to investigate reward and associative learning in connection with morphine and the neurokinin pathway. Specifically, the CPP experiments tested the rats’ ability to associate one chamber with reward and another with no reward. The strength of these associations were assessed based on the time spent in either chamber when given the choice. Reward chamber-associated injections – with morphine or saline – were conducted for 15 minutes every other day for 10 days. An animal’s place preference was considered with respect to its choice on the 11th day, in which entry into the reward chamber was not followed by an injection. CPP scores – the time spent in the reward chamber on the 11th day minus the time spent before training – were highly positive if there was a strong preference for the reward chamber and highly negative if there was a strong preference for the non-reward chamber.

To test whether VTA-specific inactivation of the gene which produces NK1R prevents morphine-induced CPP, rats were administered an agent which inactivates NK1R (Cas9) or a placebo into the VTA and underwent CPP testing. Placebo-treated rats trained on morphine had an average CPP score of 144.9 compared to Cas9- or placebo-treated rats trained on saline, with a score of -13.5. There was no difference between Cas9-treated rats who were administered morphine versus saline. Dopamine levels and eating habits were also examined to relate reward to these effects. In placebo rats, morphine significantly increased dopamine release in the NAc over a 3 hour period compared to saline. Fifty-five days after treatment, both Cas9 and control animals gained weight at the same rate, suggesting that though morphine-related reward was inhibited in Cas9 rats, food-related reward was not.

To determine the effects of opioid and neurokinin activity on heat pain sensitivity, rats were administered 10mg/kg TY032 or a placebo and exposed to an infrared heat source focused on their left hind paws. Paw retraction times over the course of 2.5 hours were recorded. Mice were pre-treated with either naloxone or a placebo and administered a placebo or TY032. The time taken to withdraw their tails from a 52oC water bath was recorded. In rats, TY032 increased paw retraction times to 55% above baseline. The pain-blocking effects of TY032 lasted for 2 hours, but wore off by 2.5 hours. In placebo + TY032-treated mice, withdrawal increased to 7.72s, compared to 2.7s for placebo + placebo mice. Naloxone + TY032 treatment was not significantly different from placebo + placebo treatment.

To determine the effects of opioid and neurokinin activity on pain hypersensitivity, rats underwent surgery to sever nerves in the lower left leg or sham surgery and were administered a placebo, 0.1, 0.2, or 0.3μg/5μL TY032. Hypersensitivity to mechanical pain was tested by applying pressure to the hind paw using a wire. Hypersensitivity to heat pain was tested using an infrared heat source. With surgery, 2.1g of force were required to elicit a response in placebo rats.  In rats given 0.3μg/5μL TY032, up to 9.7g of force were required. These pain-blocking effects of TY032 lasted for 80 min but wore off after 180 min. TY032 at 0.12μg/5μL was identified as the minimally effective dose for preventing sensitivity to heat pain.

To determine the effect of neurokinin inhibition on dopamine release, 0.2μg/0.5μL TY032 or a placebo were injected into the VTAs of rats. TY032 did not significantly change DA release.

Overall, the results suggest that the addictive and pain-relieving effects of morphine are affected, in part, through the neurokinin pathway. It is likely that morphine blocks the action of GABA neurons, permitting SP release and the subsequent release of dopamine in the nucleus accumbens. The weak CPP scores obtained from TY032-treated rats suggest that similar compounds which stimulate OR in the VTA but inhibit the neurokinin pathway may serve as alternatives to addictive opiates and may be useful in the treatment of opiate addiction.